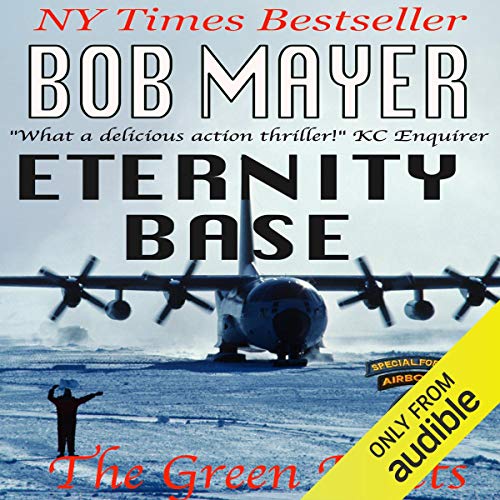 Maverick federal employee Sammy Pintella, obsessed with uncovering the fate of her MIA father, makes a startling discovery while rifling through some inactive government files. A dozen faded black-and-white photos seem to point to the existence of a secret US Military base built in the frozen wastelands of Antarctica during the height of the Cold War.

Aided by Special Forces veteran Dave Riley, she heads for Antarctica. But they aren't alone. Spies, North Koreans and other shadowy forces are also en route, because deep inside Eternity Base is something people will go to extreme lengths to get: a cache of nuclear warheads.

"Unlike most military stories this will appeal to general audiences as a fine thriller. Highly recommended, indeed." ( Midwest Book Review)

What listeners say about Eternity Base

A decent thriller that keeps you guessing. The characters are not particularly memorable, but the story pulls you along.

A story of survival and conspiracy

This is the best of the green beret series so far. Mayer made this feel more relatable to nonmilitary audiences, but still a thrilling ride of "what if" for those of us with military backgrounds. All around great read.