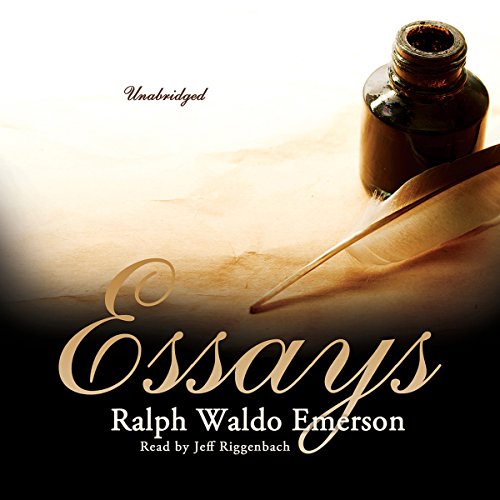 Here in one volume are both the Essays: First Series and Essays: Second Series from one of the most influential philosophers in American history.

Although Ralph Waldo Emerson, perhaps America’s most famous philosopher, did not wish to be referred to as a transcendentalist, he is nevertheless considered the founder of this major movement of nineteenth-century American thought. Emerson was influenced by a liberal religious training; theological study; personal contact with the Romanticists Coleridge, Carlyle, and Wordsworth; and a strong indigenous sense of individualism and self-reliance. Emerson’s best work was done between 1836 and 1860, a period which includes his famous Essays.

These essays contain his most important writing and radiate with sensitivity and wonder. Here Emerson’s prose shows him to be both a vigorous thinker and a profound mystic, a man of exquisite feeling combined with stern moral fiber. His strong love of retirement from life, contemplation of the sublime and the mystic, his self-reliance, and his strong character left their stamp not only on such writers as Thoreau, Whitman, and Emily Dickinson but also on the American character at large.

Ralph Waldo Emerson (1803–1882) was a renowned lecturer and writer whose ideas on philosophy, religion, and literature influenced many writers, including Henry David Thoreau and Walt Whitman. After an undergraduate career at Harvard, he studied at Harvard Divinity School and became an ordained minister. He led the transcendentalist movement in America in the mid-nineteenth century. He is perhaps most well known for his publications Essays and Nature.

“Emerson’s influence…continues to be profound on American thought.” (Masterpieces of World Literature)

What listeners say about Essays by Ralph Waldo Emerson

I am a fan of Emerson, and when I buy a book purporting to be authored by Emerson, it should be his work rather than something modified by the reader or nameless editors. If you want someone to censor great literature for you according to their own revisionist agenda, and don't care to puzzle through a work yourself, then you have found your audiobook!

What was most disappointing about Ralph Waldo Emerson’s story?

I listened to the audiobook and enjoyed the narration. But, some parts sounded "off" and quite different from what I remembered of the text. I checked my copy of Emerson's essays and found that they did not contain some of the things uttered in the narration. It may be that the reader is working from a different edition, or perhaps was moved by some muse to change Emerson's words, but I don't care for unidentified departures from the text. If Riggenbach, or others, want to bring their revisionist agenda into the narration of these essays, they should clearly say as much.

What does Jeff Riggenbach bring to the story that you wouldn’t experience if you just read the book?

Added perspectives unique to the reader and quite distinct from the original author.

The book itself is without peer, but this rendering of it lacks fidelity to the original. That having been said, the narrator possesses a rich and entertaining voice. He could read a phone book and it would sound grand.

Would you listen to Essays by Ralph Waldo Emerson again? Why?

Definitely. I really enjoyed this book and it really helped me to reevaluate how i look at my life.

I am a big fan of Emerson and have been eagerly awaiting versions of his work in audio -- however, I simply CANNOT listen to this narrator - the voice is overly deep and low. It's like listening to music with too much bass. I've tried turning the bass setting to low, treble to high -- but it's still too much. I probably should have immediately requested a refund but I let it go. Because this book is completely unusable/unlistenable for me, I give it the lowest possible overall ranking, despite the 5-star content.

“What I must do, is all that concerns me"

Would you listen to Essays by Ralph Waldo Emerson again? Why?

Yes. If Emerson lived today we would probably classify him as self-help and he would be invited to TED talks. Tapping in to inspirational essays/lectures given into the 19th century is something quite extraordinary and it is nice to listen to that wisdom in audio format, because it's meant to be heard and was written for open discourse/presentation.

What was one of the most memorable moments of Essays by Ralph Waldo Emerson?

The transcendental eyeball walking and taking nature in.

His voice was very soothing and complimented the Emersonian themes very well.

Be original, try to carve your own path, don't be a copy of someone else. America and the New World can make things new rather than imitate the old Europe ways.

Though I highly appreciate Emerson's work, listening to such heady material is extremely difficult. I found myself drifting off regularly.

What was one of the most memorable moments of Essays by Ralph Waldo Emerson?

Self-Reliance is a classic no matter if one is listening or reading it.

The narrator is a reader of words and has little understanding of what he’s reading. Emerson is one of the history’s greats and deserves better treatment than this.

The essay Nature is not the one you're thinking of--it is a reduced version. His voice is also extremely dry and boring. Not that I find the story to be that interesting to begin with (I'm not a huge fan of Emerson), but this was an extremely boring version of it. Buy the book and read it on your own (I recommend the essential readings of Ralph Waldo Emerson), or skip Emerson altogether. Extremely long and not worth my time.

Had some pretty good stories, as well as good points that came crossed. I had to check this one out since Napoleon Hill recommend it.