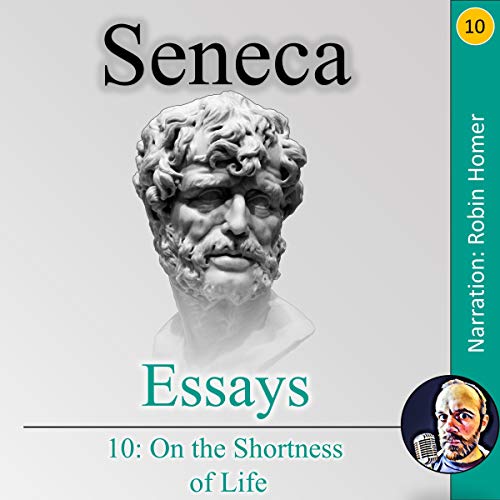 Essays 10: On the Shortness of Life

By: Seneca
Narrated by: Robin Homer

On the Shortness of Life was written by Seneca around the year AD 49. He argues that we waste so much time because we do not properly value it. We expend great effort in protecting other valuables such as money and property, but because time appears intangible, we allow others to occupy it and take time away from us. Wise people, on the other hand, understand that time is the most valuable of all resources, and with effort can free themselves from external control to engage in meaningful introspection and create an intentional life.

Seneca urges listeners to live in the present and adapt themselves to a purposeful life in agreement with Nature. Only by doing so, can one then truly unlock both past and future. The completeness of each present moment allows one's awareness to expand to the equal of that of the universe, and achieve true virtue and happiness.

The statements which urge Paulinus to retire from public life are in notable contrast to Seneca's advice in his essay "Of Tranquillity of Mind" to seek public employments in order to render life attractive. However, in his related treatise, "On Leisure", Seneca makes the point that there is no inconsistency and that one can serve the greater community in either or both roles.

What listeners say about Essays 10: On the Shortness of Life