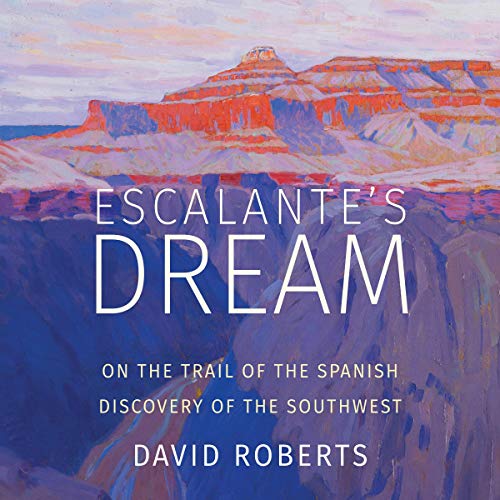 In July 1776 a pair of Franciscan friars, Francisco Atanasio Dominguez and Silvestre Velez de Escalante, were charged by the governor of New Mexico with discovering a route across the unknown Southwest to the new Spanish colony in California. They had other goals as well, some of them secret: converting the indigenous natives along the way to the true faith, discovering a semi-mythical paradise known as Teguayo, hunting for sources of gold and silver, and paving the way for Spanish settlements from Santa Fe to Monterey.

In strict terms, the expedition failed. Running out of food and beset by an early winter, the twelve-man team gave up in what is now western Utah. The retreat to Santa Fe became an ordeal of survival. The men were reduced to eating their own horses while they searched for a crossing of the raging Colorado River in Glen Canyon. Seven months after setting out, Dominguez and Escalante staggered back to Santa Fe. Yet in the course of their 1,700-mile voyage, the explorers discovered more land unknown to Europeans than Lewis and Clark would encounter a quarter-century later.

What listeners say about Escalante's Dream

Well it was just that I

Couldn’t get past the authors intermingling of his personal story and the tale of these two intrepid explorers. There is sadness in the authors personal life which for me dulled the potential shine of an interesting little known bit of history.
I wanted to know about the two adventurers and I did learn something new.
I just felt as though the author needed to write a separate autobiography on himself of his life because there is enough there to be very interesting indeed! He seems to be quite a well educated and accomplished man.
I enjoyed learning about this little known bit of history.

Leave your Politics out of it .

This would have been a great story if the author would have just told it and left his lefty Political views out of it.

Not really about Escalante

I have read several of David Roberts’ other books and enjoyed them. This book,however, is a departure from his previous books. Roberts fought cancer and for some strange reason he chose to include all the details of his disease, his medications, his setbacks, etc., etc. in this book woven into a story about Escalante’s trip. The book is very choppy going from historical details to Roberts’ medical issues (in agonizing detail) and back to history. It is basically impossible to listen to.

I could not finish this book and cannot recommend it to anyone. If you want to read a good book by David Roberts read In Search of the Old Ones. Skip this one.

This book dragged a tiny bit, thus the four stars rather than five, but I enjoyed it very much. It's really fun to imagine life in 1775 in New Mexico, as the two padres set out on their exploration route. The descriptions of encounters with native Americans were fascinating, and the descriptions of the topography equally so. The highlight of the book was imagining what it would have been like for those early explorers to encounter giant slickrock canyons and towering mesas with no maps, no GPS, no exact idea of where they were going. I love David Roberts's writing, having read several of his mountain climbing books, and especially enjoyed his descriptions of retracing the route of the padres in modern times, and the little petty annoyances he encountered en route. He did a lot of research for the book, and has written other books and articles about the early inhabitants of the southwest, so there was a lot of valuable insight and detail throughout the book. The narrator was great despite a few mis-pronunciations here and there.

since I have traveled throughout the Southwest, the history the author presented was quite interesting. I felt two things really detracted from the book- 1) the author's snide comments about his wife in the beginning of the book and 2) while he castigated D&E for their "self-righteous condescension" toward the native peoples they met, he was equally scornful of the local people he met during his own travels. I found it really hard to stomach after awhile.

Roberts remains one of the finest authors I've ever had the pleasure of reading. This journey of adventure, while different than many of those he undertook in his younger years, still rings true with the spirit of exploration and discovery that he always brings.

This travel history does a gear job covering the history so well and also brining it to date with the present condition and situation. A fun and educational book