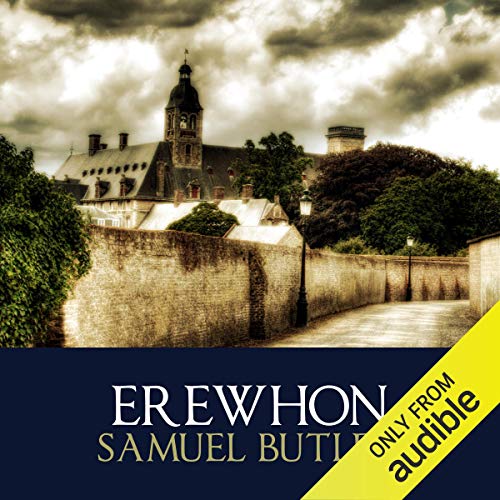 Film, television, and radio actor Michael Maloney has a voice that seems especially well suited to the classics. His impeccable diction and grand British accent have animated many a Shakespearean character. In his performance of Erewhon (an anagram of "Nowhere"), Maloney brings a dignified humor to Samuel Butler's 1872 satire of Victorian society. Maloney's voice conveys a clear love of language, perhaps cultivated over 30 years on stage and an even longer time reciting poetry. In fact, when asked about his audiobook work in an interview with Macmillan Readers, Maloney said, "Radio and audio recordings are all about language and, through my work in Shakespeare, I have become a specialist in language". That love is truly evident here.

Setting out to make his fortune in a far-off country, a young traveller discovers the remote and beautiful land of Erewhon, and is given a home among its extraordinarily handsome citizens. But their visitor soon discovers that this seemingly ideal community has its faults - here crime is treated indulgently as a malady to be cured, while illness, poverty, and misfortune are cruelly punished, and all machines have been superstitiously destroyed after a bizarre prophecy.

In Erewhon, criminals are considered to be ill and are "treated" by "straightners" who make them well, whereas those who have physical illnesses (or suffer bad luck) are considered criminal and are tried and punished. Thus an embezzler will be treated for his "illness" and the party who was robbed will be tried in the Court of Misplaced Confidence. The consistency with which Butler carries through with this conceit is impressive and consistently entertaining, and this is only one of the "curious" conventions of Erewhonian society.

Another fascinating chapter in Erewhon explains how machines are on an evolutionary track that will surpass and then come to dominate their human creators. The detail of the argument is impressive (the discussion of "vestigial organs" in machines is hysterical and accurate), and no matter how far-fetched it must have seemed in 1872 when the book was published, it seems much less a satire and more a serious fear today. This is a book of great intelligence and wicked humour. As a simultaneous mind-stretching exercise and laugh-generating experience, there are few novels of any age that are its peer.

Samuel Butler (1835-1902), a British writer strongly influenced by his New Zealand experiences, is best known for his utopian satire, Erewhon, and his posthumous novel, The Way of All Flesh. Butler was born in Langar Rectory, near Bingham, Nottinghamshire, England, into a long line of clerics. Butler, who was a detractor from widely-accepted religious, social, and scientific ideas, achieved fame posthumously in 1902 and has ever since been recognized as a momentous Victorian writer.

What listeners say about Erewhon

wonderfully read book from over 100 years ago

a must read for those interested in multiple personalities of one thing alone. eye opening