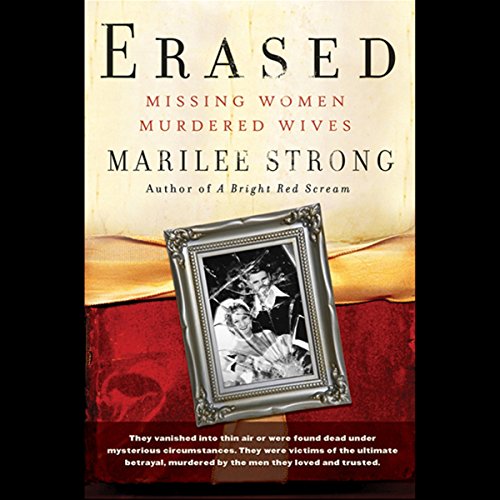 Based on five years of investigative reporting and research into forensic psychology and criminology, Erased presents an original profile of a widespread and previously unrecognized type of murder: not a hot-blooded, spur-of-the-moment crime of passion, as domestic homicide is commonly viewed, but a cold-blooded, carefully planned, and methodically executed form of erasure. These crimes are often committed by men with no criminal record or history of violence whatsoever, men leading functional and often successful lives until the moment they kill the women, and sometimes children, they claimed to love. A surprising number go on to kill a second or even third wife or girlfriend, often in exactly the same way.

In more than 50 chilling case studies, Marilee Strong examines the strange and complex psychology that drives these killers, from the murder a century ago that inspired the novel An American Tragedy to Scott Peterson, Mark Hacking, Jeffrey MacDonald, Ira Einhorn, Charles Stuart, Robert Durst, Michael White, Barton Corbin, and many others. Erased also looks at how these men manipulate the legal system and exploit loopholes in missing persons procedures and death investigation, exposing how easy it can be to get away with murder.

"With its blend of novelistic journalism and concise psychiatric research, Strong's exposé will appeal to more than just true crime fans." (Publishers Weekly)

A Fascinating Barrage of Painful Truth

This was one of the most riveting, informative and -- I'm almost afraid to say this, because a book on this subject should be somber and difficult -- ENTERTAINING audiobooks I've read this year. Of course, she treats the subject with all the seriousness it deserves, but she also invests it with a life that true crime writing often misses in it's cold recitation of fact after fact, detail after detail. But it's almost impossible to turn away from the parade of sad, complex and truly unbelievable stories the author relates about these "Eraser Killers." But even though almost every case she describes has the same basic plot elements and character types (sociopath kills trusting lover and elaborately disposes of body), the author reveals a compelling throughline in the stories and manages to find the genuine heart and soul of each person involved. Case in point: I'm guessing you, like me, thought you had heard everything you wanted to know about Scott and Lacey Peterson. But Marilee Strong does an amazing job relating the small, human details we've never heard about, and suddenly you're reading about real flesh and blood people who you find yourself actually invested in. Not necessarily LIKING, but invested in. The narrator plays a big part in the success of this audiobook; she is one of those rare narrators that is so good for the material, so evocative in their reading that they almost completely disappear. And that may be the highest compliment I can pay a narrator. I really enjoyed this book, and if you have even a minor interest in true crime, human tragedy, or great non-fiction writing, I suspect you will enjoy it too.

This was a very interesting book. It does mostly talk about the death of Lacy Peterson but does describe some other cases that are similar. I like Ann Rule and have read most of her books and I believe you would like this book if you like Ann Rule. Also, if you like this book, consider "True Story" by Michael Finkel.

Marilee Strong uses compelling anecdotal evidence to argue that many women who come up missing or dead, could well have been murdered - ie "Erased." She calls for more timely investigation of missing women and timely processing of missing persons' reports. Using the Scott Peterson case as a common thread, Strong argues that there is a growing number of men who murder women because they are no more practical use to them. She raises an important issue, builds a strong case, and will stir the reader with her arugments. Erased is well written, thought provoking, and well read by Deb Thomas.

I thought this an interesting audio book which was well read by the Narrator. I work in Domestic Violence and admit to cringing every time I heard the term erased but the book was insightful and worth listening to. One that I would recommend spending your dollars on. The author states that these offenders behave in a manner contrary to their nature and there is no reported history of DV in most of the cases of these so called "erased women" but I would suggest there would be as most woman that I assist confide they don't talk about it even to their most loved ones.

I downloaded this title because it looked like an interesting topic, certainly a timely topic. I had two problems with it though; first, the author constantly and repeatedly keeps saying the phrase eraser killers. I understand. You want to coin a new term for a certain type of killer, you want to make sure you get credit for a new term, but after the thirty third time of hearing how and why she calls these men erasers in the first hour of the book, I wanted to scream, "I get it", now tell me something interesting. That is the second problem, the writing just wasn't interesting and in some cases downright confusing, and mostly just boring. The author switches between killer subjects right in the middle of a paragraph and you are left thinking she is talking about one killer, when she is actually writing about someone else without any lead in or indication of a change. I went back and replayed one three minute segment three times because I thought I missed something or fast forwarded. No, I didn't miss anything. It was just as confusing the third time as the first. This seems like a great topic for a book, but I can't recommend this author or text, but I will give her the credit for creating a new term for a specific type of killer. I got that part.

Wow, I am surprised at the good reviews. The poor writing of this book was awful. It repetitive and contradictory at the same time. Nearly every sentence had three or more descriptors that mean the same thing like "deceptions, lies, falsehoods". Or "eerily, hauntingly, mistifyingly". It drove me crazy. The contradictions were confusing. I was constantly rewinding to see if I'd miss heard. For example, she says that "eraser" killers are not psychopaths and then goes on to describe how they are. She says at one point that psychopaths have no emotional reactions, but then tells how one killer throws up upon hearing his mistress in an interview. Sounds like an emotional reaction to me. The term "eraser" is used to describe a type of killer who are methodical planners, like studying forensics, and then kill cleanly and dispose of the body, effectively "erasing" the victim. But she identifies killers who shot their victims and stage it as a robbery or suicide as "erasers" but they don't really fit the definition she gave. The author also states her own judgments and conclusions as fact. Such as saying these men are motivated by a blank desire to be rid of an outdated possession when they kill their wives, but there is no evidence given or any killer interviews. The writing meanders badly as well. There are whole paragraphs describing psychopaths, then a few words about something different, but then more paragraphs reiterating what she'd already said about psychopaths with no tie in! She also claims to know things known only to the killer such as when one bought cigarettes that it was his "reward". It looked to me like she was jumping to conclusions and making her own biased judgments. I paid 8.95 for this book and am kicking myself. The author said she had worked in journalism, but I saw absolutely no evidence of any experience or skill in writing. Disappointing.

very disappointed in this book. its presentation, before purchase, led me to think it would be a much more intimate, personal view of the various cases of missing wives that have been in the recent news. this was very misleading.

this book might perhaps satisfy a student looking for a textbook-type presentation of elements regarding missing wives cases. one could easily draw up an outline of these elements, highlighting facets where such cases were similar or dissimilar, etc., from the analysis this book gives.

however, if you are expecting some good old human interest that would REALLY illuminate your understanding of these obscenely ghoulish but seemingly rather common crimes, a delving more deeply into them than the popular reporting has provided, as i was expecting, prepare to be totally let down.

i soldiered on with the book, maybe halfway through it, expecting to, at some point, come to the real meat i was looking for, the ENLIGHTENMENT, before frustratedly giving up. it just was not there. the narration itself was perfectly ok. but this is NOT a book, it seems to me, that is going to make it to any bestseller list. it is DRY, DRY, DRY.

The author belabors her thesis to the point of distraction. The book could have been much shorter.

interesting; reading takes some getting used to

Very interesting book with a strong and important argument -- that law enforcement needs to address intimate-partner murders quickly and seriously. There's a lot of discussion of the Scott Peterson case. The reading is quite fast, though, with few pauses. Because it was so interesting I stuck it out and eventually got used to it, but just keep it in mind.

I think that the narrator was ok. But the story was uninteresting. It didn't seem to me that it was really about anything more than just a

Something by Ann Rule