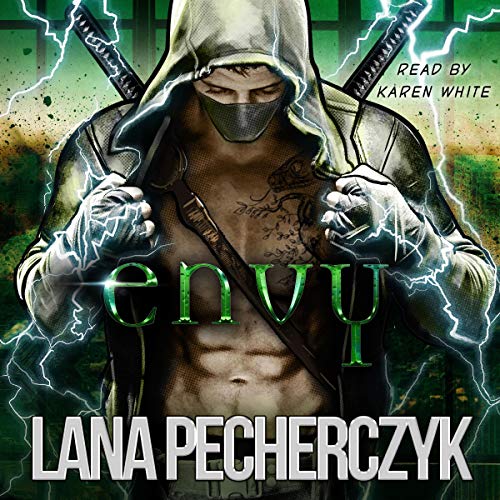 Deadly sin has consumed Cardinal City. Violence, murder, and mayhem are only the beginning. A family of genetically modified heroes is the city's only hope...if only they can resist sin long enough, they just might stand a chance.

Disgraced hero Evan Lazarus punishes himself in the underground cage fighting scene. He blames himself for the tragedy that tore his family apart and left the city without its saviors. Traveling a dark path toward vengeance, if he’s not careful, he’ll become the evil he was created to fight. And then he meets her - a woman who embodies his sin’s opposing virtue. She’s smart, relentless, and electrifying…. She’s everything he secretly craves.

Grace Go almost died in the blast that killed her parents and now seeks justice for the survivors. When her investigation crosses paths with a fiercely protective but damaged hero, she is intrigued. The more she sees him, the more he ignites a desire she thought long gone, and the easier it is to stay ignorant to the secret that could ruin her opinion of him forever.

When a figure from Evan’s past emerges, in league with the evil Syndicate, their scheme threatens to destroy everything he holds dear. Pushed to the limits, he will have to pull his family from the brink of oblivion and become the hero the city needs...or will envy drive him to destroy Grace and his only chance at love and redemption forever?

The Deadly Seven is a paranormal/sci-fi romance featuring genetically modified heroes who must find a lifemate or become the deadly sin they are destined to destroy. Perfect for fans of superhero shows like Batman, Arrow, The Flash, and Superman... but with more heartfelt and hot romance from the hero and his love interest. If you like fated mates, second chances, a genetically modified band of warriors, alpha heroes, and strong heroines, then you'll fall head over heels for the Deadly Seven. For mature audiences only.

What listeners say about Envy: A Genetically Modified Superhero Romance

This story was fantastic, entertaining, well written with a great flow, that leaves you wanting to listen to just one more chapter..... Excellent descriptive details, very engaging story and plenty of romantic tension. Karen White's reading was so enthusiastic and really enhanced the whole book. What a great read. If you haven't read Lana's work before, I highly recommended it. Thoroughly enjoyable. I'm so ready for number 2!!

Fabulous Audio of a Fantastic Book

I'm not always a fan of the audio versions of my favorite books, but this did not disappoint!

Envy is a fantastic story. It has everything you need in a great SciFi epic. Genetic engineering, super humans, super powers, excitement, intrigue... but more important than the super human aspect is the humanizing of these extraordinary beings.

The story is amazing. The characters are endearing and believable. The setting is gritty and fantastic.

Do yourself a favor, get sucked into the world of the Deadly Seven!

One of my favorite series

I really enjoyed this book! The Deadly Seven series is one of my favorites on Kindle and I was so happy to have it come to audio book! This story is so different from most story lines you see and I cannot wait for the next one in the series! I highly recommend this book!

I have read the series in ebook, but love love love the audio great choice on narator does an amazing job adding life to a fabulous story!!

So, I read the synopsis and thought ok let’s give it a try. I am so glad I did. In the first chapter I was hooked. Fast paced, and really a different take on the sins. I am so glad that I gave this a try and can’t wait to download greed. I do recommend getting on amazon and downloading the prequel sinner and read it right now it’s free.

I loved every part of this audiobook, Lana is a new author to me, but not for long, I can't wait for book 2..the characters, storyline and narrator all had me hooked... a different take on the 7 deadly sins, and well worth a listen.