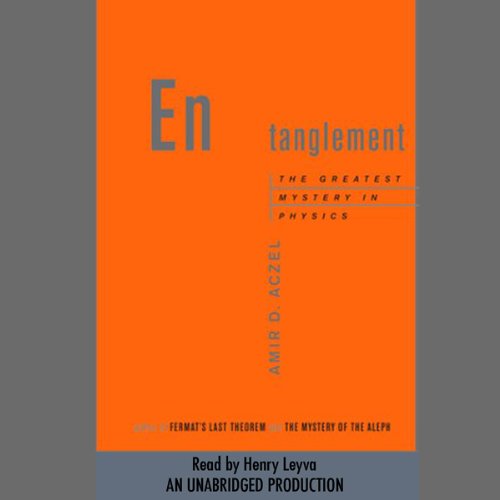 Will "beam me up, Scotty" become reality? Quantum mechanics suggests it may...and soon.

Since cyberspace - a word coined by a science fiction writer - became reality, the lines between "science" and "science fiction" have become increasingly blurred. Now, the young field of quantum mechanics holds out the promise that some of humanity's wildest dreams may be realized. Serious scientists, working off of theories first developed by Einstein and his colleagues 70 years ago, have been investigating the phenomenon known as "entanglement," one of the strangest aspects of the strange universe of quantum mechanics.

According to Einstein, quantum mechanics required entanglement - the idea that subatomic particles could become inextricably linked, and that a change to one such particle would instantly be reflected in its counterpart, even if a universe separated them. Einstein felt that if the quantum theory could produce such incredibly bizarre effects, then it had to be invalid. But new experiments both in the United States and Europe show not only that it does happen, but that it may lead to unbreakable codes, and even teleportation...

"Mathematician and science writer Amir D. Aczel has amused and edified readers with his clear explications of the profundities of numbers, especially those that led to enduring questions in mysticism and philosophy." (The New York Times)

What listeners say about Entanglement

Aczel presents not only the science, but also the scientists behind a rather daunting subject. He puts a face to go along with the names of the physicists giving an insight into the human side of quantum physics that (outside of Feynman's books) you rarely find.

Some of the equations and experimental setups don't come across perfectly without the figures to go with them, but even with the hard (as well as occasionally difficult) science, the overall flow and tone of the book is still both enjoyable and accessible.

If you like physics or science fiction, you should get this.

Audio Book is Not a Good Format for This Book

This is not a book that I was able to enjoy at all in audio-book format. I am not a scientist nor a mathematician, but I like to think that I am reasonably astute and have read quite a few books on science and math. But this is not the right format for this book. It is not easy to follow the numerous formulas, tables, and calculations read by the narrator and I was completely lost most of the time. I stayed with it to the end, but I wouldn't do it again for any reason. I have read a couple of other books by this author, and enjoyed them. But not this one

Aczel is normally a top-notch science writer, but here he falters, producing an only mildly interesting book that tries to explain elementary quantum mechanics. There are some interesting parts of this book, particularly the history of entanglement theory and the rivalry between Einstein and Pauli, two of the greatest physicists of the 20th century. However, when the book gets technical, it becomes difficult to impossible to understand, like most popular accounts of quantum mechanics. It similarly drags when current physicists talk about recent advances in quantum mechanics, as their explanations are often difficult to understand, usually relying on the previous explanations. There's also surprisingly little discussion of practical applications in computing, cryptography, and (despite the description) teleportation.

I'd recommend Aczel's other book, especially God's Equations, but not this particular one. For a popular account of quantum mechanics, The Fabric of the Cosmos is a little better, though still far from ideal.

I am a phd chemist and was hoping that this book would provide some insight into one of the most unusual consequences of modern physics - entanglement. However, the book spends way to much time in providing background material that is interesting if you are not al all familiar with the like of Einstein and Shrodinger but does not help in the understanding of entanglement.

His examples are in two categories- too simple to be useful and too complex to be understood - there is little middle ground. I was very frustrated in reading this book as it moved from one extreme of my understanding tothe other. At the end, I don't know any more about entanglement than I did when I started.

I LOVED THIS BOOK!

This is my favorite since Bill Bryson's "Short History of Almost Everything." If you loved that one you will love this one too!!! I look forward to listening to it again and again.

Not as good as I hoped

I have an M.Sc. in astrophysics and took quantum mechanics courses at the university. No longer working in the field, I hoped to refresh my refresh my knowledge and reconnect with the intellectual challenge and adventure that those courses provided. Unfortunately, Aczel spends too much time listing which physicist read what paper, where he travelled and whom he spoke to (or otherwise got "entangled"). It gets boring after a while. Too little time is devoted to explaining ideas and their impact. After listening to the whole book, I don't feel like my understanding of quantum entanglement is any deeper than before. I can't compare to the author's other works, but it appears that he was lazy about this one: listing names, dates and meetings is easier than explaining esoteric and counter-intuitive ideas. Also, the narrator's misreading of the formulas (e.g. frequency pronounced as "v" instead of the Greek letter "nu") left an impression of sloppiness in production.

GREAT BOOK! But get a hard copy with it as well

If you know NOTHING about College physics, then move on. You will not enjoy it.This will stretch your imagination till it hurts! I enjoyed it so much that I bought the hardcover after going thru the audiobook. Frankly, I think you need the book to understand the idea in a greater depth. If you liked this book but felt the math was missing, I would recommend you also "read" 'The Odd Quantum"

Great Book, if you can stand the narrator

I have to admit, the content and subject matter of this book is fascinating. However, the narrator makes it sounds like the cold reading cast calls for an infomercial host. I never thought I would get hung up on such an insignificant matter as intonation or cadence, but there is something so repetitively irritating and falsely enthusiastic about the way this book is read that I had to stop listening and buy the hardcopy. A good read, but a terrible listen.

Good book, but one can get lost from time to time in the details and theories.

I didn't get much more out of this than what was in the publisher's summary. I had hoped for a layman's interpretation of the principles and implications of Entanglement but got a lot of detail I couldn't understand. It seemed to be one equation after the next, lots of constants, variables and derivatives. It's been years since I've had calculus or physics so this was way over my head. Perhaps the phenomenon is so strange it can't be simplified. I found the narrator boring as well. If you're not a mathematician or a physicist, I suggest you forget this one.
Stephen Hawking's A Brief History of Time was much more understandable and interesting.

Reader cannot read formulas. Uninteresting background personal stories alternated with notes on quantum theory. A mess of a book and an unqualified reader.

Not at all spooky, especially at a distance!

A very well written and delivered account of entanglement. Einstein will be (half) spinning in his coffin.

very interesting book full of surprises and a few secrets.
it seems that science fiction is now lagging behind science fact. it challenges artists and writers to more to a new level of visualization to stay ahead of the game.

Would you listen to Entanglement again? Why?

What other book might you compare Entanglement to, and why?

Quantum reality, because of the accessible and fascinating way the subject matter is offered.

A very human and enlightening account of the developments leading to the discovery of the most intriguing phenomenon in the known universe.