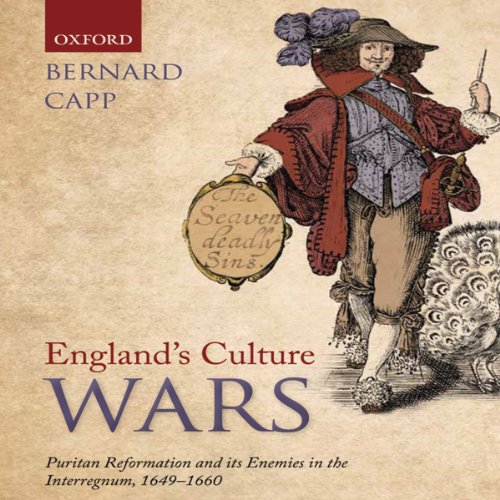 Following the execution of the king in 1649, the new Commonwealth and then Oliver Cromwell set out to drive forward a puritan reformation of manners. They wanted to reform the church and its services, enforce the Sabbath, suppress Christmas, and spread the gospel. They sought to impose a stern moral discipline to regulate and reform sexual behaviour, drinking practices, language, dress, and leisure activities ranging from music and plays to football.

England's Culture Wars explores how far this agenda could be enforced, especially in urban communities which offered the greatest potential to build a godly civic commonwealth. How far were local magistrates and ministers willing to cooperate, and what coercive powers did the regime possess to silence or remove dissidents? How far did the reformers themselves wish to go, and how did they reconcile godly reformation with the demands of decency and civility? Music and dancing lived on, in genteel contexts, early opera replaced the plays now forbidden, and puritans themselves were often fond of hunting and hawking. Bernard Capp explores the propaganda wars waged in press and pulpit, how energetically reformation was pursued, and how much or little was achieved. Many recent historians have dismissed interregnum reformation as a failure. He demonstrates that while the reforming drive varied enormously from place to place, its impact could be powerful. The book is therefore structured in three parts: setting out the reform agenda and challenges, surveying general issues and patterns, and finally offering a number of representative case-studies. It draws on a wide range of sources, including local and central government records, judicial records, pamphlets, sermons, newspapers, diaries, letters, and memoirs; and demonstrates how court records by themselves give us only a very limited picture of what was happening on the ground.

This is a well written book that I found both fascinating and horrifying at the same time. I personally found the narrator very fitting to the material.
This book could be used as a warning against allowing a minority in any society with extremely held views from being allowed to impose them on the whole

Enjoyed this very much

Best survey of society during the Interregnum

Geographically diverse and detailed, drawing on primary sources and Capp’s long career, you get a strong understanding of the diversity and nuance of the attempted reformation of manners. Translates well to the new Woke Religion…

I thought this must be a joke. It certainly isn't Bruce Mann the professional reader narrating this. I found it impossible to continue to listen to more than a few paragraphs because of the monotony of his intonation. What's going on here?