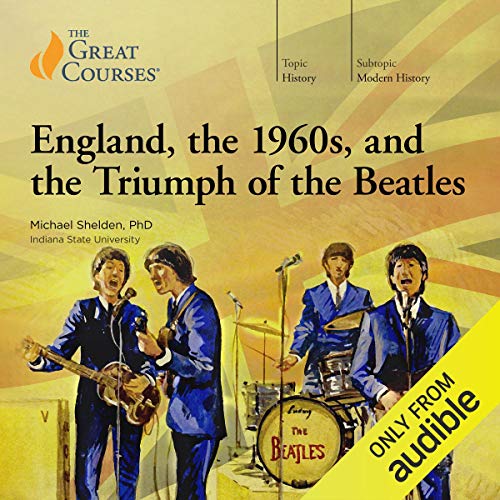 England, the 1960s, and the Triumph of the Beatles

How did four young men from a faded old seaport in Northern England lead such an epic musical and cultural revolution? Why could the story of the Beatles only have happened in such a charged decade? What remains to be said about this British band that hasn’t been said before?

Questions like these lie at the beating heart of these 12 lessons that offer a fresh look at how this celebrated band became one of the most compelling voices against the status quo. Taking you deeper than any simple music survey, Professor Shelden zeroes in on the cultural backstory of how the Beatles emerged as a worldwide phenomenon. Using the advantages of hindsight, recent scholarship, and interviews with key figures, he reconstructs an incredible period in sonic and social history for both dedicated Beatlemaniacs and new listeners alike.

Giving equal weight to the Beatles’ early years as they do to the apex of their career and eventual dissolution, these lectures invite you on a whirlwind adventure that reveals the evolution of a band like no other - from school kids to musicians to pop phenomenon to film stars to artists inevitably drawn in separate directions. They also offer eye-opening cultural insights into some of the band’s greatest hits, including “Yesterday”, “Back in the USSR”, and “Do You Want to Know a Secret?”

An eclectic blend of cultural history, biography, and music history, this series is your chance to discover how the Beatles became one of the most compelling voices against the status quo.

What listeners say about England, the 1960s, and the Triumph of the Beatles

An Excellent and Original Take

As a whole, this may be the most balanced interpretation of the Beatles and their significance I have ever come across. I do not agree with all of Shelden's views, for example, I think his take on "Being for the Benefit" is a little fanciful. But even this is not without its value - it makes you think. Highly recommended.

You'd think all was said on the Beatles, but this really is different. Very happy listening - everything about the Beatles finally made sense. This professor is a consummate professional. He's not talking down to you one time.

You get perspective: why Beatles shot up like a rocket; several things they did that were each so distinct; how so much fortune and fame affected the group. No big theories, just background facts put into perspective in a way that's surprisingly delightful. A series of new things were actually said that no other author previously expressed! And all so reasonable.

You can listen to this professor easily. If they come out with more audiobooks by him, I'm in.

A welcome addition to the Beatles literature...

The lecture format works well here and the material is well documented and compelling. I've read most of the major Beatles books, most recently the extended version of Mark Lewisohn's Tune In. This is not a deep dive but more broad and sweeping. A splendid time listening to these lectures.

Great Courses? For middle school, maybe. Very simplistic, very little information, none of it new. The author has a major bromance about Lennon, dismissing or downplaying contributions by the other Beatles throughout their years together. The only good thing is that the songs discussed are available on a Spotify playlist.

Michael Shelden, who wrote one of the best books ever about Mark Twain (“Man in White”), gives a quick overview of the Beatles with a little bit of historical and cultural background. There isn't much here that will surprise anyone who's studied the Beatles for any length of time, but if you're looking for an introduction to the band, this is a good place to start. Shelden does have a knack for putting things in context.

He has a low-key, friendly voice; he’s clear and straightforward in his presentation, and the study guide is well-organized and decently illustrated. (I prefer guides that are laid out in outline format, as this one is, rather than the narrative guides: the outlines make it easier to spot the important information.)

The course comes with a Spotify playlist, with a qualification. The qualification is that under Spotify’s rules, to use the playlist as intended — ie, to play the songs for each lesson in order — you have to have a paid membership; the free membership (as of this writing) only allows playing in shuffle mode. This isn't the fault of the Great Courses, and it's not really the fault of Spotify either; they deserve to make money off the service they provide. (It wasn't a problem for me, already having a membership. But it needs to be made clear upfront.) It's a good playlist, and the tracks for each lesson are well-selected to highlight topics mentioned in the lesson.

My sense is that if Shelden turns his attention to a subject, it's because he knows he has something useful to say about it, and so far I agree with him. When I see his name in a “forthcoming titles” list, my antennae always go up. I recommend this one, again more as an introductory look at the subject than a deep academic study. (For that, I'm still waiting for the remaining two volumes of Mark Lewisohn’s bio of the band.)

My one complaint about the content is that it's too front-loaded. By that I mean that in a course with 12 lessons, lesson 11 only brings us up to Sgt Pepper. That leaves way too much material to be covered in the last lesson: the final four albums (if you count Magical Mystery Tour); the advent of Apple Corps; the disagreements over the management of Allen Klein; and the breakup of the band. Shelden covers all this efficiently, but I would have preferred a course structure that devoted more time to the last couple of years of the group.

I grew up mostly after the Beatles broke up… I liked some songs, but would not call myself a fan, so I never sought out their stories- either individually or collectively. This was a good introduction that inspired an interest in their music and their stories. The professor is clearly knowledgeable on this subject, if a bit too starry-eyed, at times, of this group of young men turned super stars. I am looking forward to following up with the music and the films of the Beatles.

I learned so much. I enjoyed it immensely.

A recent binge-purchase of audiobooks included this series of lectures on The Beatles from The Teaching Company. It might have taken months for me to get around to “reading” it, had I not also stumbled onto a photobook of The Beatles at a yard sale this weekend, and a puzzling bullet point in the chronology of the band: in August 1966, The Beatles performed their last concert. I found that astonishing. But yes, the band lasted only seven years, and so when people contrast the young or early Beatles vs. the old or late Beatles, those changes were shifting and swirling rapidly, without the luxury or space of an evolutionary shift and sift. There was no settling process.

With that refreshened chronological perspective, I attacked the Teaching Company audio series from Dr. Michael Shelden, known for his scholarship on Orwell, Melville, and Twain (Mark, not Shania). In terms of pace and depth (a dozen 30-minute lectures), it’s just right, as Shelden covers plenty of ground while pinpointing relevant scenes. The narrative weaves together the “-ologies,” so that the biography of the boys involves sociology, economy, geography, as the series title indicates. Regularly, we encounter themes of The Beatles as a new young threat to the old established order. Dangerous? Shelden notes the strategic importance of Ed Sullivan’s casually inserted final phrase of introduction on February 9th of 1964, a phrase the band would never have used to describe themselves. “Now tonight the whole country is waiting to hear England’s Beatles, their tremendous ambassadors of good will.”

Those looking for the language of music (theory, influences, etc.) should look elsewhere. Those looking for a lecturer who is excited about all the ways The Beatles broke new ground have found their spot.

As someone who had a lot to learn about the band and its historical backdrop, I ate this up. Not a wasted word. Perhaps even for expert listeners, Shelden might provide perspective, especially for those who are all-or-nothing regarding certain characters. For example, if you think manager Brian Epstein or producer George Martin were functionaries who were quickly outgrown by the Beatles, Shelden sheds light on their strengths and their necessary work in The Beatles’ ascendency. Nearly everyone (especially each Beatle) is appreciated for the difficulties they create as well as the brilliance they deliver/contribute.

I loved it. I only wish, as was the case with The Beatles themselves, that it had all lasted longer. If Shelden ever decides to expand these lectures, I’ll readily buy those, as well.

Whether you are a novice or a seasoned consumer of Beatles history, you will find enjoyment in this listen. The author is very engaging and informative. I wish it were a bit further in depth but it’s still enjoyable. My only gripe has also been mentioned by other reviewers. The author clearly has a favorite Beatle and he often downplays the accomplishments of the other members to wax poetic about Lennon. I appreciate Lennon immensely. His contributions to The Beatles and music as we know it should be discussed but, I feel the author did a disservice to Paul, George, and Ringo.

A story about the Beatles wothout a note of Beatles music. Just wrong
Lots of historical opinion, as well.

easy to listen to with a nice supplement added to the story. Entirely enjoyable and nicely done!

I enjoyed this great course. Each lecture presented different information. Highly recommended if you want to know about that time period.