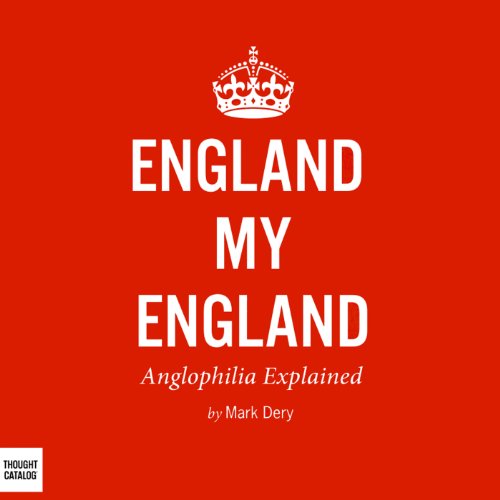 Why are many supposedly egalitarian Americans fascinated by the aristocratic privilege of Britain as displayed by Downton Abbey and the royal family? In this illuminating essay, cultural critic Mark Dery explores the attractions that Britain's literature, music, and style present for Americans. From a childhood fascination with the Wonder Books to an adolescent fixation on Jethro Tull and adulthood admiration for Christopher Hitchens, Dery’s take is highly personal, yet also displays larger societal insight. By turns savage and sympathetic, his prose is also wryly funny. Performer Mark Ashby does a good job capturing Dery's tone, and alternating between the British and American accents of the text.

Downton Abbey has brought out the Anglophile in American fans of the hit TV series. But Anglophilia has a long history in America. Why are some native-born residents of our Shining City Upon a Hill, where All Men Are Created Equal, seduced by the fluting tones of manor-born privilege? At last, Anglophilia explained - in American, thank you.

What listeners say about England My England

Qualifies as my most irritating Audible purchase

I guess people who think Anglophiles are snobbish, social climbing jerks might enjoy this book. Thankfully it was only 48 minutes long so I listened to the end. Certainly not what I expected.

If you love being an Anglophile then you can give this title a miss.

Not worth it, and it was free!

What would have made England My England better?

Maybe addressing reasons Americans find England and royalty interesting rather than just ramble about a Wonder Book the author read as a youth. Also, it became obvious the author disdains anyone who does have an interest in England and its history. I believe the author sought to impress his readership with his vocabulary and his "better than you" attitude rather than provide anything positive.

Would you ever listen to anything by Mark Dery again?

No way! He comes across as a pompous academic. I can't imagine him producing anything enlightening or entertaining after this short disaster.

Given the material, I think the narrator did about as well as possible.

Anger, definitely! We thought we would hear a lighthearted look as what makes Americans love the royals and England but it was just a slam to both England and to those who love it.

The book started out with a little bit of humor and we actually laughed out loud but the book steadily became irritating. We didn't finish it because it just wasn't worth putting up with the author's attitude. If we could give zero stars, that would have been the score.

There were enough positive Amazon reviews to overcome my skepticism from the negative reviews, and after all, it was free and less than an hour long. How much of a gamble could it be? More than you'd think.

I found this essay incoherently scattered, heavily dependent on comments from other authors, but failing to state a distinct thesis to build an argument on. The result was a failure to explain American Anglophilia, and what came across to me a general contempt of American fans of Masterpiece and BBC America. Not the fun I had hoped it would be.

What was this? I couldn't tell.

What would have made England My England better?

The author of this piece did not make it clear what the work is supposed to be. Was it a parody of scholastic works? If so, it missed the mark completely. Was it actually supposed to be an analysis of American-based Anglophilia? If so, it missed the mark completely. Quite frankly, it was a thinly-veiled excuse to insult anyone that doesn't fit the author's narrow view of a "proper" Anglophile.

What could Mark Dery have done to make this a more enjoyable book for you?

Who would you have cast as narrator instead of Mark Ashby?

Mr. Ashby did the best job that he could with such drivel.

If you could play editor, what scene or scenes would you have cut from England My England?

If I were the editor, it would not have made it to publication at all.

I was hoping that this would be a serious look at the phenomena of Anglophilia in the United States. I think that there is a lot to address on that subject, and it would be a fascinating study of how the history of the United States and its varying relationships with the United Kingdom have come influenced the modern American mind to create this pervasive fascination with both the reality and the perceived reality of the U.K.

Unfortunately, all that this ended up being was a rather incoherent and unorganized ramble through one man's memories of childhood punctuated with repeated barbs aimed at entire cross-sections of the population ranging from the far Right to the far Left. The end result being a wasted hour and the unsubstantiated inflation of ego for the author.

This was definitely an opportunity that was wasted by the author. It is a shame.

Was there a point to this

I am very glad this was free. I am not even sure I would have been happy paying 0.99. I love England. I am what they call an America Anglophile. To me this book / short lecture sounded awesome. In reality. What was the point of this whole thing, I could not find one any where in it. It was just random person talking about England and how he saw people viewing England. No Science behind it, not studies, no nothing that I could tell. Just random opinion and not one that really led to any conclusions. It listens like a Jr High student writing a short essay for a class, and I may be a little generous in putting them in Jr. High

I got this as a freebie and thought it might be interesting. I was wrong. The great thing about it....it is only about 45 minutes. It is mainly comprised of someone sharing their obsession with England through various quotes from English works. Snore.

It is had to imagine anyone who would enjoy it

He sounded harsh and condescending

What character would you cut from England My England?

After 10 minutes I couldn't understand what the hell was this thing about and deleted it.

Well that was a ho-hum 38 minutes of my life. The promise of our love of Downton Abbey explored just didn't happen and in the end, it was a lot of rambling about nothing. Watch Downton, love the Queen and ignore the book.

Even at the price of FREE, not worth the time.

This is a bigoted, liberalist piece of garbage. I would not recommend this title to anyone at anyitme, anywhere. This is just a published manifesto of a sick, twisted and vile mind! DO NOT BOTHER!