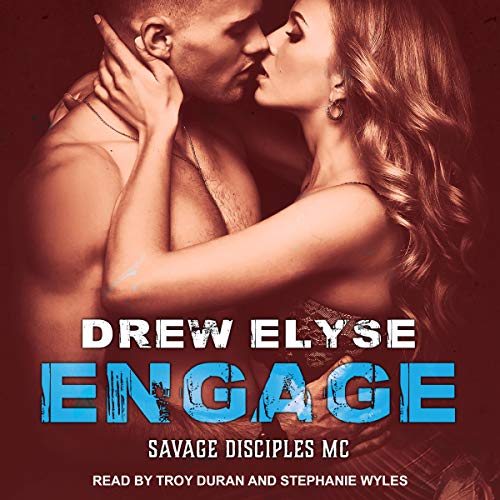 They came for her in the night. When she wakes, she's in a cell. She has no idea if it will help, but it is the only option she has: She tells them she belongs to the Savage Disciples MC.

A Disciple will fight like a savage when it counts.

Years ago, he lost everything. Now, the club is the only thing Jager allows himself to care about. Nothing matters but his Savage Disciple brothers. At least, until she arrives, and he has a decision to make.

This biker has no idea what choosing to engage could mean to a Disciple's daughter.

What listeners say about Engage

Loved listening to this story, the author has done an excellent job of this book. The narrators were wonderful. overall performance great

Pretty good book, Troy Duran is a great narrators with his deep voice 😉.. this story kind of made me upset that the female character took forever to fear or be concerned about the 15year old girl.. that didn’t sit well with me.,wish there was a lil more dark action scenes in the book.. and some club momma drama lol.. didn’t care for his name for her.. understand it’s Bdsm but seriously wish he would of called her something else then “Pet” especially knowing she was captured to be sold to someone else... I don’t know it just bothered me. Lol

Great book, made me cry and laugh. First time with this author will be looking out for other books.