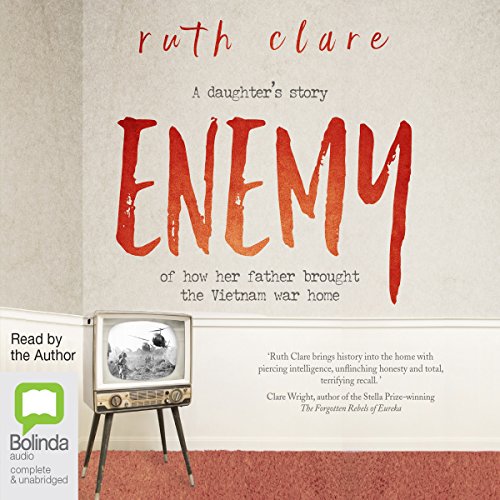 Ruth Clare's father came back from the Vietnam War a changed man: a violent, controlling parent and a dominating, aggressive husband. Through a childhood of being constantly on guard, with no one to protect her but herself, Ruth learned to be strong and fierce in the face of fear.

After escaping her difficult upbringing, Ruth went on to have a family of her own. Facing the challenges of parenting brought her past back to life, and she lived in fear that she was doomed to repeat her father's behaviour. Wanting to understand the experiences that had damaged her father, she met with other veterans and began listening to their stories of war, conscription and returning to civilian life. What Ruth uncovered left her with a surprising empathy for the man who had caused her so much pain and heartache.

Weaving a striking personal narrative with a revelatory exploration of the effects of war, Enemy is a bold, compelling and ultimately triumphant memoir from a hugely impressive new Australian writer.

What listeners say about Enemy

I am a daughter of a VV and your story rang true for myself and my whole family.

The Defence Force needs to take some steps to help partners and children of Defence personnel to understand the whys and hows.

I wish you well for your future.

This book and the reading are literally brilliant. I still think about all the characters daily which is my criteria for a great book. The voices used for the different people were perfect. I admire the rawness, the total absence of self indulgence, the captivating and completely convincing detail of the memories. The structure of the time. It’s really really good. I want to see pictures of everyone! It’s also tragic of course. It’s got a really essentially Australian viewpoint too, direct, down to earth, no bullshit voice. Everyone should read it.

Compelling from start to finish. Loved it.

Enemy is beautifully written - brave, powerful and brutally honest, gritty but also incredibly tender. It honours an untold history and gives voice to its characters in such a way that you hang on every word. You can tell the author has a background in acting, her performance is flawless.

An extraordinary story by a very gifted writer.

Ruth Clare has managed to capture her childhood with High Definition crystal clear vision, before HD was even a thing. I could smell the bread in her father's bakery, feel the oven heat of Rockhampton, see the painfully slow telephone dial in an emergency, taste the salty air on a deserted island, feel the greasy scalp of a bank manager, see the love for her mum, feel each painful blow from her father, and experience the anger, empathy and truth in every carefully recalled experience of Ruth's life story. This is a truly courageous and inspiring Australian story. Kari O'Gorman- Melaleuca Blue Life Writing.