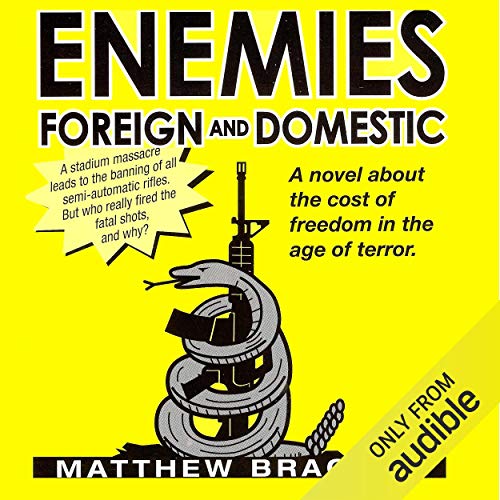 Enemies Foreign And Domestic is a domestic terrorism thriller set "in the near future." The story begins on opening day of the NFL season, when bullets begin to rain down upon the upper deck of a packed football stadium. A panic stampede ensues, leading to mass casualties. The alleged sniper is found holding a smoking assault rifle, and is killed by a police marksman.

One week later, Congress bans the private possession of all semi-automatic assault rifles. Gun owners are given one week to turn in their semi-automatic rifles, or face a five year mandatory sentence.

The plot revolves around the true identity of the actual sniper. The alleged sniper killed at the scene may be a patsy, and many Americans refuse to turn in their banned weapons, leading to a civil crisis in the nation between supporters of the 2nd Amendment and a federal government trending toward tyranny.

What listeners say about Enemies Foreign and Domestic

Great story if you can get past the performance

Would you listen to Enemies Foreign and Domestic again? Why?

Yes, because once you get used to the audio quality and the delivery of Mr. Kemp, the book is great with a lot of inter-moving parts. It is a well written book.

It was a great story and once you started it, it was a dramatic thrill-ride that kept you wanting to know what was going to happen next.

Would you be willing to try another one of Mike Kemp’s performances?

Probably not. The audio quality is sub-par and often times you can hear birds or frogs in the background. Maybe these were meant to enhance the audio experience, but I'm not sure. Often times, Mr. Kemp will give dialogue in a monotone voice leaving it up to you to interpret who is talking. Also, there are short phrases and words in the middle of a sentence that sounds like it was re-recorded and inserted into the audio.

Would you listen to Enemies Foreign and Domestic again? Why?

Yes I would listen to the book again, because it is a great story, however out of all the books I have listened to this was without question the worst narration so far. It literally sounded like the narrator had a bucket on his head and the mic was set up a few yards away. His tone never changed and it was very hard to tell who was talking.

Would you be willing to try another one of Mike Kemp’s performances?

Would you consider the audio edition of Enemies Foreign and Domestic to be better than the print version?

Everybody is bashing the reader and audio quality. FORGET THEM! I don't want some Hollywood professional reading a book like this to me. I want somebody that sounds like he would be on the right side when it comes down to it. You know the old crusty range officer at the range? Imagine him reading to you.

Yes. If you are of this mindset, you will enjoy it. Terrifying, but good

Have you listened to any of Mike Kemp’s other performances before? How does this one compare?

If you consider physically cringing then yes. What happens in this book truly terrified me.

The audio is fine if you try this! Prophetic book!

If you could sum up Enemies Foreign and Domestic in three words, what would they be?

George Orwell would be saying "I told you the would happen"

What was one of the most memorable moments of Enemies Foreign and Domestic?

The whole book was like watching current events that are unfolding today.

Listen folks. The reader just happens to have a VERY deep voice and a southern or Texas accent. Give me a break. I only had to turn down the bass on my radio and the sound quality improved tremendously.. Give it a try. It makes a big difference!

Would you try another book from Matthew Bracken and/or Mike Kemp?

I would love to read the other books in the series but the narration and recording quality are both so bad that the thought of sitting through many hours listening to this makes me want to rip my ears out and shove them back in as ear plugs. The story on the other hand is pretty good. Very reminiscent of what is starting to happen in our own government. More people should read this so that we might prevent the Nazi police state that out politicians seem to want to create. I think will buy the printed book for the remainder of this series though. In the future I will avoid Mike Kemp like the plague.

The droning monotone voice bereft of emotion is horrible. Add to that a heavy accent and environmental noises in the recording, as well as levels changing from chapter to chapter make this book exhausting to listen to.

The reader, while having an interesting voice, does not vary it a bit when quoting different characters making it difficult to differentiate in multiple character conversations.

They could have used a real recording studio. On some chapters, there was the echo of a bare room. Some chapters were loud and clear. In several chapters, crickets could be heard in the background.

Do you think Enemies Foreign and Domestic needs a follow-up book? Why or why not?

I have not finished it yet. If a followup were written, I would strongly consider buying it.

Great book with a full potential for present day

What did you love best about Enemies Foreign and Domestic?

Everything in this book is potentially real for today. I have found it difficult to put down. My wife listened first and found she was so angry with the dirty actions of our government. Our government could easily step over the line at any time. If you feel the constitution is valuable, read how some may attempt to discredit it in order to get selfish demands met.

Difficult to hear when he attempts to change from one speaker to another. One voice for all.

If you could take any character from Enemies Foreign and Domestic out to dinner, who would it be and why?

I'm sure that I would enjoy it if the narrator and sound quality were better. The forward sounded alright, but once chapter one started the sound quality dropped. It sounds like the narrator called the recording studio with a bad cell phone.

Would you ever listen to anything by Matthew Bracken again?

I really want to listen to the book I purchased, however the sound quality is so poor I can't stand it.

Who would you have cast as narrator instead of Mike Kemp?

Scott Brick, or anyone who can use a bit of voice inflation

What character would you cut from Enemies Foreign and Domestic?

I only got through chapter one before I put it down

Worth any gun owner's while

Exquisitely written and sharply focused, Mr. Bracken renders an over-the-horizon glimpse not soon forgotten by the awake & aware that is tragic and heartbreaking.

What made the experience of listening to Enemies Foreign and Domestic the most enjoyable?

The story is thought provoking especially in light of current events.

What was one of the most memorable moments of Enemies Foreign and Domestic?

The set up. Understanding to what extents political factions will go to achieve their agenda.

The quality of the narration was horrible. I endured it for the sake of the story. I wish the authors/publishers of these sub-culture novels would spend the money to hire a good narrator-they would surly recover that investment through increased sales.

What disappointed you about Enemies Foreign and Domestic?

What could Matthew Bracken have done to make this a more enjoyable book for you?

Really didn't get into it due to poor presentation

Boring monotone. Really should not be doing the job

If you could play editor, what scene or scenes would you have cut from Enemies Foreign and Domestic?

Get a new narrator

An appalling quality of recording, It sounds extremely amateurish. The narrator reads in a mechanical and expressionless manner. Come on Audible, a bit of quality control would not come amiss.

Has Enemies Foreign and Domestic put you off other books in this genre?

A flat and expressionless performance.

The plot, though far fetched, is an OK bit of hokum. Its a bit disturbing that the "good" characters in this book are clearly as murderous and deranged as the "bad" characters.