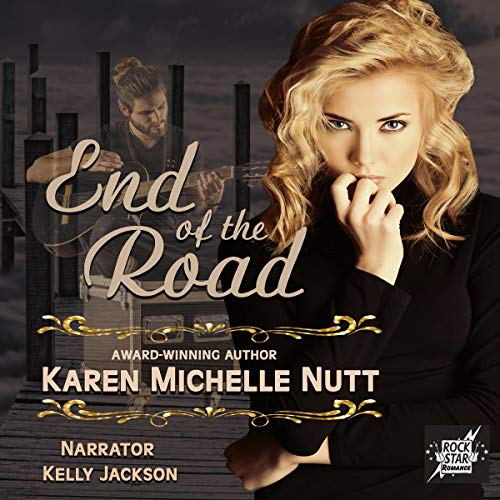 End of the Road

Lars Gunner, the frontman for Silent Plaids, died 23 years ago, and his death was ruled an unfortunate accident. Despite the fact that he can't recall what happened to him in his last moments of life, he is convinced that he was murdered. He has been trapped in limbo until his daughter Cecilia unearths his journal and is able to see him. She seeks help from Kaleb, a psychic, but as they resurrect the past, the secrets and lies surrounding Lars' rock-and-roll life just may be the death of them, too.

What listeners say about End of the Road

Another Great Story from Karen

I have read a few of Karen Michelle Nutt’s stories now and have really enjoyed all of them. This one has a bit of sex and a bit of cussing but neither was gratuitous and it fit with the story.
End Of The Road is a murder mystery where the victim is one of the active investigators. Story is well put together with plenty of action, intrigue, and false leads to keep it exciting even when you have it all figured out long before the characters in the story.

Kelly Jackson did an excellent job with the narration. She really brought this story to life for me.

past present and mystery

What happened to Lars? Was it suicide? Was it murder? Twenty-three years later and that mystery has not been unraveled. That was until pieces started to fall into place. Cecilia, Kaleb and Lars go on a paranormal adventure or mystery. Guess that part depends on you and how you see things.

I like the premise of finding answers after dying. Finding peace. Finding life.

Narration was clear and flowing.

*****
I received this audiobook as part of my participation in a blog tour with Audiobookworm Promotions. The tour is being sponsored by Karen Michelle Nutt. The gifting of this audiobook did not affect my opinion of it.

End of the Road

The End of the Road is the first book I have read by Karen Michelle Nutt. I thought this was a pretty good read. I loved Cecilia and Lars together. They were so fun and I could not help but to laugh out loud at some of their scenes. I was intrigued by the author’s ability to create such an unique tale that kept my attention throughout.
I enjoyed getting the opportunity to listen to the audio version of The End of the Road. Kelly Jackson’s version did a great job brining this book to life. What a perfect performance!
I am giving The End of the Road four stars. I would love to read more by Karen Michelle Nutt in the near future.
I received the audio version of this book from the publisher. This review is 100% my own honest opinion.

I liked the premise for End of the Road. It's a believable tale of treachery that had me enthralled from the beginning.

The audio quality was good, but I found the narrator to be a little dull at times. I almost didn't finish, but I'm glad I stuck it through. You may want to turn audio speed to 1.25x.

I received this audiobook in exchange for an honest review.

What happens when you die and don't crossover? Lars Gunnar has been in limbo for years, knowing he's dead but unable to remember what caused his death. When his daughter finds his notebook, she begins to see him, and together they try to find the answers. When I first started listening to this, I figured it would be your typical ghost story, but this is so much more. The characters are amazing. Cecilia is hesitant, yet she can't negate what she sees. Lars is larger than life even when dead. Add in the psychic's son Kaleb, who not only can see the dead, but is attracted to Cecilia, and we have romance, suspense and unusual suspects! It's got twists and turns, and the mix of people we meet has so much to offer. It's my first book by Karen Michelle Nutt and I will be checking out more! It sucked me in and held me to the very end!

Kelly Jackson gives an outstanding performance. It's my first listen by her and she gives this story her all. There is a large cast of characters, and she gives each one their own voice and personality. I love that she could do young and old, drunk and sober, evil and ghostly. A little of everything made this performer shine.

About half this book is solving a murder mystery, which is what I liked about it. Cecilia grew up with plenty of questions about her deceased father, Lars, but her mom struggled deeply with her own grief and couldn’t give Cecilia all that she needed growing up. Now with Cecilia as an adult, she finds herself often taking care of her mom who has embraced alcoholism fully.

Pretty soon Cecilia teams up with Kaleb, a psychic and private detective. They are the only two who can see the very talkative ghost of Lars. All three are convinced that there’s more to Lars’s death but as they dig deeper into the facts of the case, dangerous things start happening to Cecilia and Kaleb.

While I enjoyed the plot, the mystery, I did find the characters a little shallow. I would have enjoyed more character development especially with such a small cast. Lars still acts like a 20s rock singer; Cecilia doesn’t have much going on in her own life even though we are often told how idependent she is; Kaleb likes ghosts, respects his mom, and thinks Cecilia’s bum is a gorgeous thing; Cecilia’s mom is a bit of a boozy lost soul. And that’s it.

If you enjoy romances, this tale is a sweet romance at heart. Cecilia and Kaleb first fall into lust and then friendship and love. Their instant deep connection was a little sudden for me, but I think others would like it. While there is some flirting and attraction on scene, the sex happens behind closed curtains. It’s cute but a little bit of a snooze for me as romance isn’t my cup of tea.

Overall, it’s a fun mystery and a light read. I liked the paranormal parts of it as well as digging into the past. 4/5 stars.

The Narration: I really enjoyed Kelly Jackson’s narration. She had the perfect voice for Cecilia, capturing her range of emotions in this tale. I also liked Jackson’s performance for Lars’s voice, especially when he’s exasperated or offended. Jackson had individual voices for all the characters and her male character voices were believable. The pacing was good and there were no technical issues with the recording. 5/5 stars.

I received this audiobook in exchange for an honest review. My opinions are 100% my own.