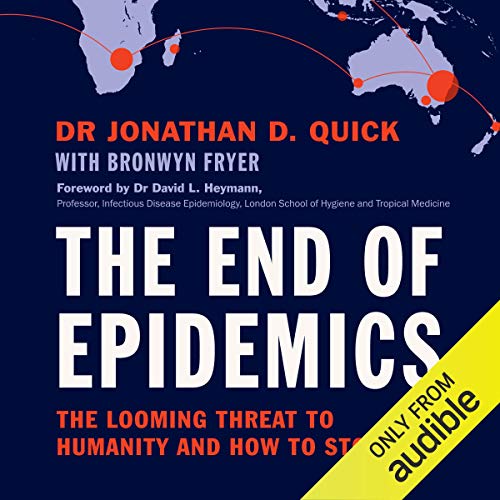 Experts predict that the next big epidemic is just around the corner. But are we prepared for it? And could we actually prevent it?

Somewhere out there, a super virus is boiling up in the bloodstream of a bird, bat, monkey or pig, preparing to jump to a human being. This as-yet-undetected germ has the potential to kill more than 300 million people and reduce global GDP by 5-10 percent. That risk makes the threat posed by ISIS, a ground war, a massive climate event or even the dropping of a nuclear bomb on a major city pale by comparison. But there is hope.

In The End of Epidemics, leading public health authority Dr Jonathan D. Quick tells the stories of the heroes, past and present, who’ve succeeded in their fights to stop the spread of illness and death. He explains the science and the politics of combating epidemics. And he provides a detailed seven-part plan showing exactly how world leaders, health professionals, the business community, media and ordinary citizens can work together to prevent epidemics, saving millions of lives.

What listeners say about End of Epidemics

Must read during Covid-19 !

A great book that summarises the origin, history and the life of viruses. I love the fluent way of history description and the combination of the personal, political, economical, social and scientific view and stories. If you are in your 20s like me and you are wondering what is going on with today’s Covid-19 - READ ! Take action so we can leave this planet without threats like this one for the future generations !

As a microbiologist, this book was maddening. I've only made it 5 chapters in, I may try and finish but its so riddled with inaccuracies it makes it hard to bear. When he called mad cow disease a virus I gave up.
Reads with a strong sense of American superiority with a touch of white saviour. Discussing his time in Africa, how incredibly dangerous it was to eat BBQ antelope, and only though the miracle of Cholera and Yellow Fever vaccines were he and his family still alive. I don't think he understands how cholera or yellow fever work.
When discussing the 1918 influenza, continuously refers to it as the Spanish flu and continues to imply that Spain was the origin of the disease.
Finally it reads like some sort of self help book, peddling "the power of seven" and saying a lot of useless things without ever reaching a point.
If anyone wants an insightful book into disease outbreaks and pandemics, I would recommend Spillover or The Viral Storm.

Perhaps Countries and Politicians will take note now! The cost in loss of life and business has been huge.
Surely it’s got to change now?
I have my reservations.

Excellent detail explaining all aspects of a global pandemic. We don’t need to know more to take action.