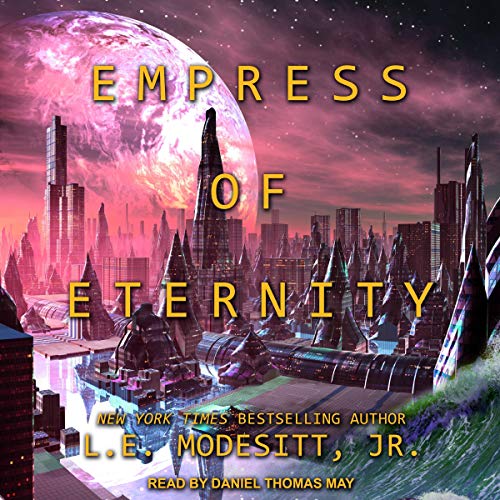 By: L. E. Modesitt Jr.
Narrated by: Daniel Thomas May

In the far future, an indestructible and massive canal more than 2,000 miles long spans the mid-continent of Earth. Nothing can mar it, move it, or affect it in any fashion. At its western end, where it meets the sea, is an equally indestructible structure comprising three levels of seemingly empty chambers.

Scientists from three different civilizations, separated in time by hundreds of thousands of years, are investigating the canal. In the most distant of these civilizations, religious rebellion is brewing. A plot is hatched to overthrow the world government of the Vanir, using a weapon that can destroy anything - except the canal. If used at full power it might literally unravel the universe and destroy all life forever. The lives and fates of all three civilizations become intertwined as the forces behind the canal react to the threat, and all three teams of scientists find their lives changed beyond belief.

What listeners say about Empress of Eternity

It took a while to get there, but worth it.

Slow at the start, but it’s necessary I think for the story to start slowly. Good concepts with interesting and sadly believable situations.

I found this narrator distracting from the story. Don’t get me wrong - he did a good job - I doubt many put the life needed into the spectrum of characters.

I found the book thought provoking - which I appreciate.