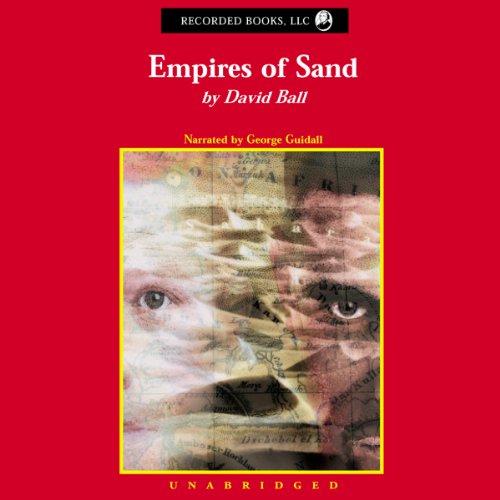 After four trips to the Sahara and extensive historical research, David Ball crafted this sweeping adventure novel spanning two continents and 15 years. Set against a backdrop of the crumbling French Empire’s attempts to colonize the Sahara Desert, Empires of Sand follows the lives of two cousins who are raised as brothers but destined to become enemies. It is 1870, and France is at war with Prussia. The son of a French count and a Saharan noblewoman, Moussa has been born to privilege. His cousin Paul will be an Army Officer like his father. For two young boys, the siege of Paris is merely another grand adventure. But as tensions rise, the French become more and more suspicious of “outsiders.” When Moussa and his mother are forced to flee to her homeland, it will be 10 years before Moussa and Paul meet again—on opposite sides of a brutal battle for control of the Sahara. David Ball has created a swashbuckling tale with something for everyone. With his masterful narration, George Guidall perfectly captures the struggles of two men as their personal loyalties shift in a rapidly changing world.

What listeners say about Empires of Sand

This book was so great it compelled me to write my first review. I will simply say that the book was perfect! It pulls you into the lives and minds and hearts of the diverse characters that people its pages; is full of action and feeling - never a dull moment throughout. I was so sad when it was over and am hoping the author is prolific!!

Read one, read them all

This is Ball's first novel, but I read Ironfire first. The characters and plots of Ironfire and Empires are largely one and the same, different only in detail. Good reads as historical fiction and the facts are accuate. The characters are rather stock and lack complexity. Ball seems to have it in for the Catholic Church. Priests and nuns have nothing better to do than engage in self-serving or sadistic activity.

really a brilliant work by a non prodigious writer

I encourage readers of historical fiction to absorb this talented author's work. life is so short for those with immense curiosity and driive, so little time to perfect the art of writing, to leave behind a legacy for future generations. this author has gifted us with an unselfish gift of insights and stimulation to learn more of history, human dimension while still pursuing his own private aspirations. jj

Not in the same calibre as Ken Follet

The Tuareg was an interesting source material. Especially in the light of the recent French intervention in Mali. However, it was not as sweeping an epic as the Sahara promised. I read it right after finishing Winter of the World by Ken Follet and I found myself continually measuring it up to it. I would have enjoyed it more if I had read them the other way round.

Maybe it is just the book isn’t for me, but I couldn’t find anything to sympathise with in any of the characters. The plot seemed to be more melodrama, or if not that, then “stock”; predictable, mechanical devices to drive the narrative. Action often doesn’t fit well with the development of the characters who act; the extent of the internal dialogue doesn’t match up with the impetuousness, thoughtlessness, or foolishness; mechanical devices.

Set in the last quarter of the 19th century, against the Franco-Prussian War and the French in the Sahara, the period should be fascinating, but it is never really a “character”.

The strength of the book is in the descriptions of physical details … Paris, action, the desert, etc; the physical aspects of the characters.

“…over the summer the moat became ever more elaborate, winding in a grand circle around the tree, with bridges made of branches where one had to give the password. And on the bottom of the moat were carefully arranged patches of rocks that—if you looked just the right way at them—became crocodiles that ate trespassers, tax collectors, and knights of the evil kingdom …”

The other strength, for me, was the reader.

The style of the writing, in audio book form, seemed to owe something to that of “The Count of Monte Cristo.”; but without that story’s heart.

It didn’t help that the description on the Audible site includes a spoiler … “…follows the lives of two cousins who are raised as brothers but destined to become enemies …”; I guess it’s somewhere in the other 13hrs.

"Job" had it easy compared to the main characters

There is NO sense worrying because every thing will GO WRONG for us!!! This should be the main theme in this story.... Because it does in triplicate!

Detail laden - from bloody battles with endless examples of man cruelty to man to tender love scenes - this story goes into complex relationships and cultures. The cousins relationship as written by David Ball becomes reality. Perhaps it is the factual historical background that makes the book wobble between fiction and non fiction. To my surprise I truly enjoyed it! George Guidall narration is excellent. I hesitate to recommend this book because of the involved cruelty scenes but if the listener can get past those details this is, indeed, a wonderful listen.

annoying "Tom sawyer" element killed it for me

Would you try another book from David Ball and/or George Guidall?

Would you be willing to try another book from David Ball? Why or why not?

What aspect of George Guidall???s performance would you have changed?

The historical settings came to life for me. Ball has a rare talent for this. I am enriched for having read this. However, his descriptions in the first half of the book of the two young boys and their adventures growing up together were a bit too "Tom Sawyer-ish." These subplots seemed to go on forever and about 50% of this could have been cut out with little loss to the story. The shifts from world-altering global events to the boys trapping rats in the church basement just didn't work for me.

Was Empires of Sand worth the listening time?

About 2/3 of it was very worthwhile. the rest was a bit laborious.

Empires of Sand is an exciting, plot driven adventure story based on true events. It starts with a bang - a boar hunt in the Bois de Boulogne in Paris. Two cousins, Moussa and Paul, are playing in the very same forest,of course in close proximity to the furious, wounded boar. What will happen?! The adventure continues chronicling the de Vries family through Bismarck's siege of Paris, 1870-71, with balloon flights and subterranean escape routes under the streets of Paris. The hunger, the rats, and two boys up to pranks. The research is solid and the escapades are fun and exciting.

The story doesn't stop there. Next thing you know you are off to the deserts of Sahara. And there we have the Tuareg people. Again the author has built his story on research about these proud people. The women are unveiled and independent, but the men are hidden behind indigo colored veils. All one sees is their eyes through small slits. Here the book continues to follows Moussa and Paul within the framework of real events. France wanted to build a railroad that would cross the Algerian Sahara south to Timbuktu in the French Sudan, what is today Mali. Colonel Paul Flatters led an exploratory expedition for France in 1880-81. The true events of this massacre are related through this story.

You are delivered one adventure after another. You get love and hatred and the evils of the Church and balloon rides and...... put your self in a deep irrigation tunnel, naked, digging as a slave. This is an adventure story that teaches about real historical events.


Impressive narration by George Guidall.The audiobook had both an author's note and a final interview with the author. Perfect conclusion to a fun book. The author says that the most successful parts of any book will be those parts where the author has had fun. Authors must write for themselves. It is difficult; you must persevere. You must build upon solid research. I think this author has had fun and there is solid research. It shows.

A novel that stays with you even when it is over

There are ok books, good books, and even great books. However, there are those novels that stand alone. David Ball's skill is evident as he transitions seamlessly from one world to another and back again. The way he weaves together two parallel and yet opposing worlds (and the people that belonged to them) keeps the reader engaged even in what some may call "slow points." Guidall's narration is exquisite, capturing and revealing both what is written and implied. The pairing of Ball and Guidall is a dynamic union that seizes the listener in the opening moments and holds them fast until the end. It is this that vaulted Empires of Sand to sit amidst my favorite novels the day I began it.