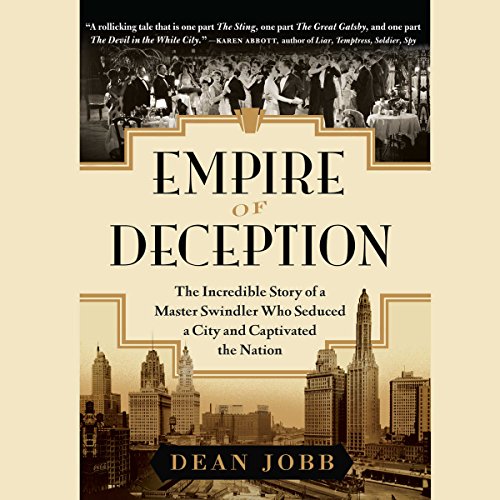 The Incredible Story of a Master Swindler Who Seduced a City and Captivated the Nation
By: Dean Jobb
Narrated by: Peter Berkrot
Length: 9 hrs and 29 mins
Categories: Biographies & Memoirs, Criminals
5 out of 5 stars 5.0 (1 rating)

It was a time of unregulated madness. And nowhere was it madder than in Chicago at the dawn of the Roaring Twenties. Speakeasies thrived, gang war shootings announced Al Capone's rise to underworld domination, Chicago's corrupt political leaders fraternized with gangsters, and the frenzy of stock market gambling was rampant. Enter a slick, smooth-talking, charismatic lawyer named Leo Koretz, who enticed hundreds of people (who should have known better) to invest as much as $30 million - upwards of $400 million today - in phantom timberland and nonexistent oil wells in Panama.

When Leo's scheme finally collapsed in 1923, he vanished, and the Chicago state's attorney, a man whose lust for power equaled Leo's own lust for money, began an international manhunt that lasted almost a year. When finally apprehended, Leo was living a life of luxury in Nova Scotia under the assumed identity of a book dealer and literary critic. His mysterious death in a Chicago prison topped anything in his almost-too-bizarre-to-believe life.

Empire of Deception is not only an incredibly rich and detailed account of a man and an era; it's a fascinating look at the methods of swindlers throughout history. Leo Koretz was the Bernie Madoff of his day, and Dean Jobb shows us that the dream of easy wealth is a timeless commodity.

"Dean Jobb's exploration of financial shaman Leo Koretz's shameless scheming is a great read, but it's also so much more than that. A brilliantly researched tale of greed, ambition, and our desperate need to believe in magic, it's history that captures America as it really was - and always will be." (Douglas Perry, author of Eliot Ness: The Rise and Fall of an American Hero)
"A captivating tale of high-flying financial chicanery in 1920s Chicago. Dean Jobb tells the story of Leo Koretz, a legendary con artist of Madoffian audacity, with terrific energy and narrative brio. A thoroughly enjoyable read." (Gary Krist, New York Times best-selling author of City of Scoundrels)
"This highly readable account of a major swindle in the Roaring Twenties in Chicago will convince any sensible reader that when it comes to investing in crackpot schemes, nobody ever learns anything by experience. Leo Koretz did exactly what Bernie Madoff did, and came to the same end, as did his investors. A dramatic read, and a useful lesson!" (Michael Korda, author of Charmed Lives)

An unbelievable tale of deception! Voicing was top class. All and all one of the best audiobooks Ive listen to.

I can't believe that I'd never heard the story of the biggest swindler in the US in the 20th century before. So interesting and I kept thinking about the Madoff case. Some things never change! My only disappointment was in the narrator. He narrated the book like he was announcing a movie at a theater. So bombastic and breathless. It drove me crazy.

We could not put the book down. Hard to believe all of this is true. I am sure a few books will be written about this era.

I enjoyed this much more than I thought I would. Fascinating and amazing at the same time. Had never heard of the character and the scam

This book was a little slow at first but then it really picked up and I found it to be quite interesting. As much as we talk about modern technology problems it's interesting to see what happens to people when they couldn't research business or people in their community before making investments.