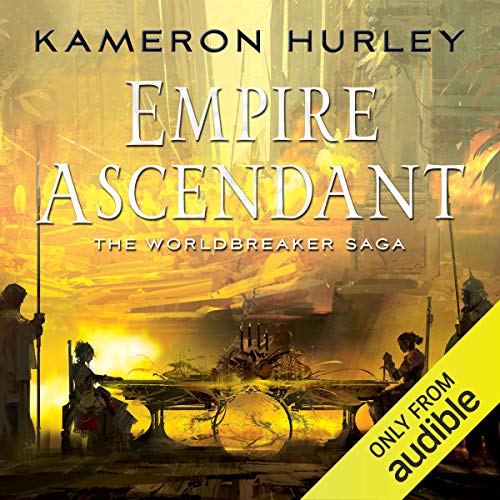 Loyalties are tested when worlds collide.... Every 2,000 years the dark star Oma appears in the sky, bringing with it a tide of death and destruction. And those who survive must contend with friends and enemies newly imbued with violent powers.

The kingdom of Saiduan already lies in ruin, decimated by invaders from another world who share the faces of those they seek to destroy. Now the nation of Dhai is under siege by the same force. Their only hope for survival lies in the hands of an illegitimate ruler and a scullery maid with a powerful but unpredictable magic.

As the foreign empire spreads across the world like a disease, one of their former allies takes up her empress’ sword again to unseat them, and two enslaved scholars begin a treacherous journey home with a long-lost secret that they hope is the key to the empire’s undoing. But when the enemy shares your own face, who can be trusted?

In this devastating sequel to The Mirror Empire, Kameron Hurley transports us back to a land of blood mages and sentient plants, dark magic and warfare on a scale that spans worlds.

Kameron Hurley currently hacks out a living as a marketing and advertising writer in Ohio. She's lived in Fairbanks, Alaska; Durban, South Africa; and Chicago but grew up in and around Washington state. Her personal and professional exploits have taken her all around the world. She spent much of her roaring 20s traveling, pretending to learn how to box, and trying not to die spectacularly. Along the way she justified her nomadic lifestyle by picking up degrees in history from the University of Alaska and the University of Kwa-Zulu Natal.

What listeners say about Empire Ascendant

Kameron Hurley has been a rare find- an author with truly original ideas & character studies & I’ve loved the God’s War series & now the Worldbreaker Saga...and yet...

This is the second series this year by a female author where the final book or books in a series are not available in audio format. The first was
The Martha Wells Raksura series, and now this amazing series. It’s frustrating!

Hopefully enough readers can convince Audible or the publishers to get their heads on straight. Id rather not even start a series if we’re only going to be left hanging. And that will lead to reduced sales eventually publishers.

This book is so boring and tedious and the audio narration makes it even worse.

Nothing of interest in the story just a lot of tedious narration that takes forever to come together. The story jumps so much as well it’s difficult to follow.