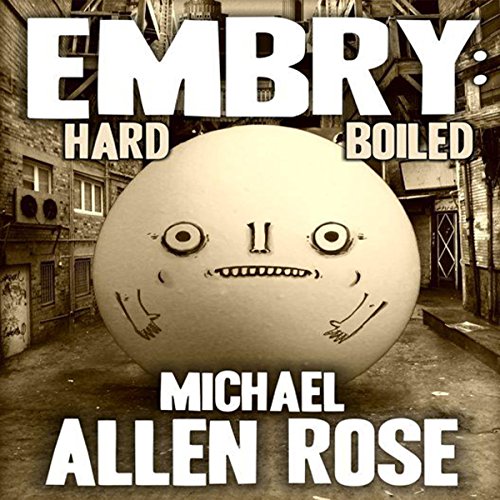 By: Michael A. Rose
Narrated by: John Dunleavy

A darkly comic noir about a chicken living in a world of anthropomorphic eggs who's wanted for a murder he didn't commit.

Life is tough for an embry. Considered a vestigial organ at best and a parasite at worst, chicken embryos are usually aborted by the egg folk early in life. Once in a while, one survives and slips through, hatching into an embry, an ostracized, lower caste anthropomorphic chicken. They have their own ghettos, and are barely tolerated by polite society. Our hero wakes up one day to find that some upstanding citizens have been scrambled. The king, his horses, and his men are now after our hero for a crime he did not commit and proving his innocence is going to be nearly impossible. Thank goodness he's armed with spurs, or the rotten eggs prowling the alleys of this strange grocery item city would fry him good. Delving deeper and deeper into the mystery, Embry uncovers his own bizarre background and finds he is hunted by a secret society who revere the most famous egg of all time, the very egg he himself emerged from the Great Fall.

From the author of Boiled Americans and Party Wolves in My Skull comes a dystopian crime story that will have you asking: Which comes first, the chicken or egg?

What listeners say about Embry: Hard-Boiled

What a fun romp!

Holy cow is this a fun book! Mystery, suspense, chicken prostitution and laugh-out-loud funny egg puns. No, literally, I laughed out loud. More than once. By turns raunchy, silly and hard boiled (ha!), this story will keep you guessing to the end.
Superbly narrated by John Dunleavy, this was a thoroughly enjoyable escape.

Kinda weird but it really works. Embry, a chicken on the run for murder. Wild!

Embry: Hardboiled is a treat. I wish I could have listened to it in one sitting. The detective story is sturdy enough to support the bizarre and comic elements, and the language cleverly bridges both worlds throughout. “It was so late it was early”; there’s a housing project called the Carton; “Cardinal Fabergé seemed like a good egg.” Action scenes are sharply written and read with frame-by-frame clarity: an alley fight leaves the pavement spattered with albumen, and the egg-on-fowl sex is surprisingly, well, sexy. Embry’s voice is side-of-the-mouth street-smart, with an occasional quirky emphasis that’s just right for this not-quite-parallel universe. Other characters are distinctive but never overperformed. Recommended for serious noir aficionados who don’t take their noir or themselves too seriously, and for fans of Jasper Fforde, Christopher Moore, Dead Men Don’t Wear Plaid, and Guy Noir, Private Eye.

What made the experience of listening to Embry: Hard-Boiled the most enjoyable?

The story hits all the expected marks for a classic detective story and the egg/fowl world is treated with a completely straight approach - that makes the puns and jokes all the more fun! All the different characters were really distinct and separate, very clearly characterized in both the writing and the narration.

What was one of the most memorable moments of Embry: Hard-Boiled?

The scene with the monks chanting is spooky and creepy - and then as you realize they're reciting Humpty Dumpty in Latin it's pretty funny.

The opening scene is so perfect - cops kicking down a door, our man the private eye is baffled, makes a run for it, leaving the dopey cops flat-footed and scrambling. It could be straight out of a Bogart movie.

I don't really ever listen all in one sitting, so it's not a fair reflection on this book. The story does truck right along though - clear, easy to follow, moves briskly from plot point to plot point. It is certainly the sort of book a person could binge.

Love all the character voices!!

Would you listen to Embry: Hard-Boiled again? Why?

No...I rarely listen to anything more than once...nothing against the story. I'd love to listen to this narrator again.

Yes...it was fun and action packed so it held my attention. The egg jokes are silly but it has enough of a story to keep you interested. It's fast paced which helps keep the story moving.

What if Nursery Rhymes were real?

A fun and suspenseful story

The well-rounded characters in Embry. Embry is a fun filled romp through an Egg and chicken populated world. Embry is accused of murder and is trying to find out who is impersonating him. This was really fun. It's also much smarter than it appears on first inspection.

Embry is a fun filled romp through an Egg and chicken populated world.Embry is accused of murder and is trying to find out who is impersonating him. There are some nasty sex scenes....lol John Dunleavy was a fine narrator. I was given this book by the narrator,author or publisher free for an honest review.

An egg-citing murder noir remorselessly peppered with puns and a bit egg-centric! And not to worry, it is full of fowl language.

A great book to read or listen to!

I enjoy a good Noir mystery centered around a down and out detective working on the wrong side of the tracks so this story was right up my alley. It was easy to substitute chickens and eggs for people as the narrator did a wonderful job, but it would have been fun to hear the author tell the story himself. I enjoyed the new take on a childhood rhyme turned into a more mature themed book. I had to listen to it in shifts due to the length but finally finished. It was entertaining and worth the time. Thanks Mike.