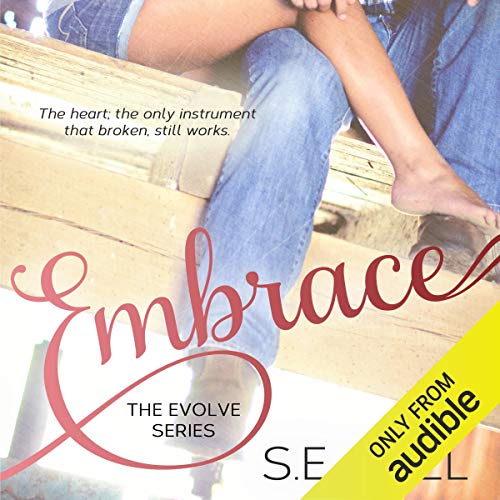 After the romantic gesture of the century, Evan Allen is now faced with no friends, ineligible to play ball...and too late to get the girl.

He's starting over alone and doesn't know quite how to proceed, until certain members of "The Crew" step in, taking him under their wing.

It doesn't take the ladies long to notice him either.

Sometimes, life doesn't go as you had planned. Sometimes, it goes better.

Due to sexual content and scenes - mature audiences recommended. This is a New Adult romance.

What listeners say about Embrace

I feel Whitley and Evans story got robbed ... personally I am sick of Laney .... other heroines in this series deserved to be featured on same level instead of spoiled know it all Laney.... imo

I was surprised at the pairing for Evan (Gah, her name is slipping my mind). I couldn't stand her in Dane & Laney's story but you get to see beneath the snark now and find that she is a funny and loyal girl. Never in a million years would I have thought they would be paired but well done!

Love all the crew cameos too!

Now This Is How To Get Over Heartbreak

I just adored Evan, talk about a true southern gentleman. This is a great coming of age series that does an amazing job of showing how these young adults grow and mature into adulthood. Whitley and Evan find friendship as the cast asides and build a relationship with each other and the ones that casted them aside. I really like that this story avoided the pitfalls of too much teenage angst. Even though this story was mainly about Evan and Whitley, we got a good dose of all the other friends in "the crew," which builds the anticipation for the next book in the series.

The narrators were okay, some of the southern accents were marginal at best. But overall a pleasant enough listen.

It is worth the credit, especially if you like young adult romance.

wish the book had wits point of view

book was good and I will continue with series but I do wish that the author had written in wits point of view.

I'm in love with this series!

The characters are real, the writing had me laughing out loud! I've never been a fan of series but S.E. Hall is an amazing writer with a great sense of humor. I recommend this series and other Hall books to everyone.

Pros I enjoyed listening and the story kept me wanting to know what was happening next. The characters were all pretty interesting and the mix of them was nice. Cons I am not sure how I feel about the nice guy role. Evan seemed kinda boring at times. Hard to not compare him to Dane who seemed to have more sex appeal.

The narration was epic for this story! I loved how everyone brought all they have to these characters and made them feel so real. I thought Laney’s story was great but Evan is my new favorite. I absolutely love this man and getting to continue forward from book one was great, we’re not stuck in a loop all over again. This man deserves his happily ever after and when he becomes friends with Whitney things are forever changed. This woman is so carefree and exactly what Evan needs especially after all he’s been through. More often then not I’m laughing out loud with their antics and when you throw Sawyer into the mix- priceless. Wonderful story and I can’t wait to move onto book three in this series. Highly recommend you grab your copy. I

I am in love with this series! S.E. Hall writes an amazing story with very well developed characters and plot. I had to buy the entire series and on audible because the narraters are amazing as well.

So far this is my favorite book in the series. It is comical and funny and the performance is fantastic. Some parts are a little over the top or a little too mushy but Evans story is the best.

This was the hardest book in the series for me. One I still read over and over, but Evan's struggle on losing his Laney Bear to Dane was so emotional. However, the way that crazy Sawyer Beckett and Zach Reece took him under their wings and pushed him back out into the world to experience life as a hot, adorable campus football star/God made the story so much more. These characters truly develop as you read through this series, and the narrator's totally capture the essence of young, attractive people embracing collegiate life and the transition from teenager into adulthood, and all that comes with it.