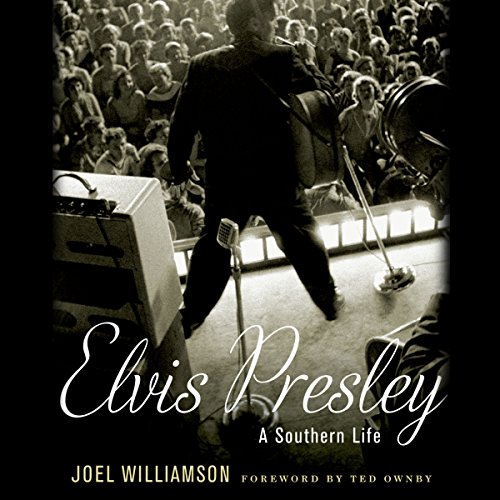 In Elvis Presley: A Southern Life, one of the most admired Southern historians of our time takes on one of the greatest cultural icons of all time. The result is a masterpiece: a vivid, gripping biography, set against the rich backdrop of Southern society - indeed, American society - in the second half of the 20th century.

Author of The Crucible of Race and William Faulkner and Southern History, Joel Williamson is a renowned historian known for his inimitable and compelling narrative style. In this tour de force biography, he captures the drama of Presley's career set against the popular culture of the post-World War II South.

Born in Tupelo, Mississippi, Presley was a contradiction, flamboyant in pegged black pants with pink stripes, yet soft-spoken, respectfully courting a decent girl from church. Then he wandered into Sun Records, and everything changed. "I was scared stiff," Elvis recalled about his first time performing on stage. "Everyone was hollering and I didn't know what they were hollering at." Girls did the hollering - at his snarl and swagger. Williamson calls it "the revolution of the Elvis girls." His fans lived in an intense moment, this generation raised by their mothers while their fathers were away at war, whose lives were transformed by an exodus from the countryside to Southern cities, a postwar culture of consumption, and a striving for upward mobility. They came of age in the era of the 1954 Brown vs. Board of Education ruling, which turned high schools into battlegrounds of race. Explosively, white girls went wild for a white man inspired by and singing black music while "wiggling" erotically. Elvis, Williamson argues, gave his female fans an opportunity to break free from straitlaced Southern society and express themselves sexually, if only for a few hours at a time.

As an Elvis fan I chose this book as I thought it would give another glimpse into my idols life. And boy did it! It was a fantastic read but at times I was taken aback by how the author talked about Elvis. What was said did not surprise me though. A thrilling book from beginning to end. A sad yet powerful look into this great entertainers life. Thoroughly enjoyed!

Comprehensive rendition of the life, both public and private, of a superstar. I found it very disappointing because there is so little insight into what made him into what he became and very little historical context of time and place, which I was expecting.
It is obvious that very few people who were closely involved in Elvis' life were interviewed and I give no credence whatsoever to the gossip-gatherer who wrote 'Child Bride' with too much given to whatever tales Ginger Alden now concocts - many sources say he had no intention of ever marrying her.
My opinion of Vernon is verified here as well as the complete egotism of E.P.; his cruel, vengeful side. I was looking for answers to WHY such dreadful behaviour towards women was, and is, accepted as 'manly' and acceptable in the South, even today.
Ultimately I was still left with many questions unanswered.