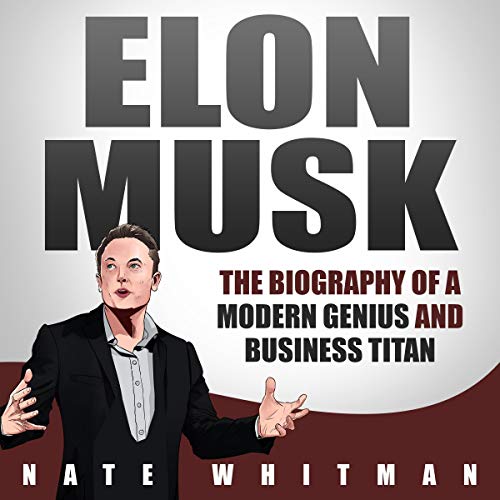 Elon Musk is undeniably a business titan. He controls massive companies like Tesla and SpaceX, and has cemented himself in history forever - but how much do you really know about the man behind it all?

Inside this detailed account of Elon Musk’s life and career, you’ll learn about his childhood and schooling in South Africa, his humble beginnings on the American continent, and his first endeavors into business. From the early Zip2 and X.com which marked the beginnings of Musk’s career, to the cutting-edge SpaceX and Tesla we know him for today, you’ll discover how an obscure and unassuming idea led to the founding of SpaceX, how Tesla revolutionized electric cars, and how these companies (and Musk himself) continue to endure against all odds.

But beyond the business, you’ll also have a chance to get a glimpse of the man himself - Musk’s polarizing public image, his countless hijinks, and famous sensations like the Not-A-Flamethrower and the media-rating site Pravduh. From Musk’s political and religious views to his appearance in key internet subcultures, Elon Musk: The Biography of a Modern Genius and Business Titan gives a unique and powerful insight into one of the world’s most famous men.

What listeners say about Elon Musk

shortened version of other book

The is an abridged knock off of Ashlee Vance's book. In fact, the majority of the Musk quotes in the book are lifted from firsthand interviews Musk gave to Ashlee Vance. The book is very disorganized; it is loosely chronological but primarily organized by topic: SpaceX, Tesla, Neuralink, etc. This makes it very hard to follow because it keeps jumping around in time and place. Plus, the audiobook sounds like it's being read by a computer. If you really are interested in learning about Musk -- who is a very interesting character indeed -- skip over this a read Ashlee Vance's book. Vance's biography of Musk is much longer, and a couple of years out of date, but it's a NYT Best Seller.

I was given this book for free in exchange for an honest review.

This was not the first Elon Musk biography I'd listened to, but the first was a few years ago, so this was a nice update/reminder at a much more manageable length. This is an inspiring man, full of flaws, but refusing to allow them to stop his vision.

Although the book is good, t feels rushed and not so much a biography but more of a quick highlight reel to gain some quick cash. It may he the author, but found that it was lacking, and in the further points in the timeline were rather cliff noted and moved on

Not Even Cliff Notes Depth