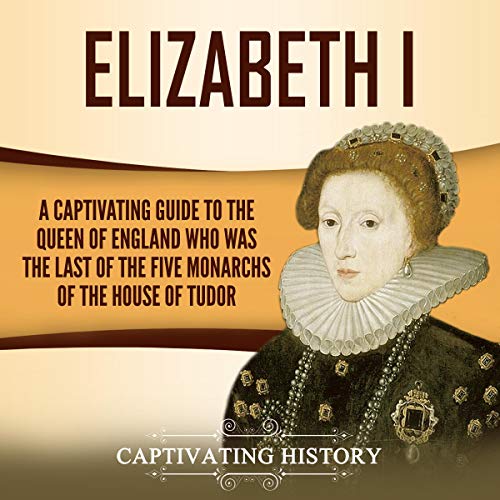 Elizabeth Tudor, daughter of the ill-fated Queen Anne Boleyn and temperamental King Henry VIII, was never meant to rule the country. Yet, when her time came, she didn’t stumble under the weight of the English crown.

Elizabeth was perhaps the most intelligent, forward-thinking monarch who ever sat on the throne before or since. Her reign is responsible for the strength of the Royal Navy, the cultivation of fine arts, the long-term stability and safety of her nation from foreign attacks, and the first steps toward international colonization.

In Elizabeth I: A Captivating Guide to the Queen of England Who Was the Last of the Five Monarchs of the House of Tudor, you will discover topics such as:

And much, much more!

What listeners say about Elizabeth I

Great book. Learned a lot, even at my age and given I am British by birth. Recommended read for historical fact.

Very helping book in your life

I was delighted with this book, because even though there are many words I haven't learned yet, it is easy to figure out the context of each story, and effectively "guess" the unfamiliar words. I'm really enjoying this book, and finding it very helpful.

A great read. The history of the kings and queens of England has always captivated me and reading this book has giving me a better understanding of that period.

This is a very interesting history of Queen Elizabeth I. Her throne lasted for five Monarchs of the House of Tudor. This is a guide to to have as a reference in history!

A Captivating Guide to the Queen


All in all, it is a masterful work that I enjoyed immensely. It was a page-turner that I finished rather quickly

Everything you wanted to know about Queen Elizabeth Step back into the events that shaped the course of her life and those she loves.History comes to life and you will get a glimpse of a fascinating and formidable queen who has given her life to serve her people.

I really enjoyed reading this book and learned so much about The English Commonwealth and the Monarchy. Great book if you are a history buff!

Good historical account. Especially interesting were the long accounts of letters and proclamations. Elizabeth the first surely was a singing star o the age.

I loved it I love to read about this era the times were hard and the crown was unpredictable!

Wonderful biography of England’s longest reigning and most Marvelous Queen!! Certainly worth the cost for a great read! Highly recommended

I would recommend this book to anyone looking to understand the pressures of leadership. Choices that you must live with do not come easy.

I wasn't sure such a short story would do credit to Elizabeth. What a happy surprise to come away with a heart felt admiration for the Queen.

I read this book for the high lights of Elizabeth 1st's life and rule of England. She was an amazing monarch.

I really enjoyed the book. Much info was taken. It was short but all significant details were there to give the reader a better insight of who she was. Thank you!

Loved the history pf my

Good overview and I learned a good bit of information about the Queen. It made me hungry to learn more.

Though an abbreviated account of the reign of one of the most effective British monarchs, this short account of Elizabeth I is concise yet pithy.

I enjoyed reading this powerful book, it increased my knowledge of the Tudor's that ruled during that era in England and the trying times that the Queen endured during her reign. I learned more

the House of Tudor

I like this book okay it’s stressed the highlights of her life and death. This book is primarily geared toward someone who knows little about Queen Elizabeth and is not interested in doing much research about her. Queen Elizabeth I: A Life From Beginning to End is just an entry-level book.

It was an interesting listen and very helpful with phrases and stories that will have you master Italian like a native. The voice-over performer was quite fluent and very good and patient when he was going back and forth with the easy translations and what they mean.

There is so much more to the story of these kings and queens than beheadings, political marriages and the reformation of the church – but those events remain some of the family’s most enthralling moments.