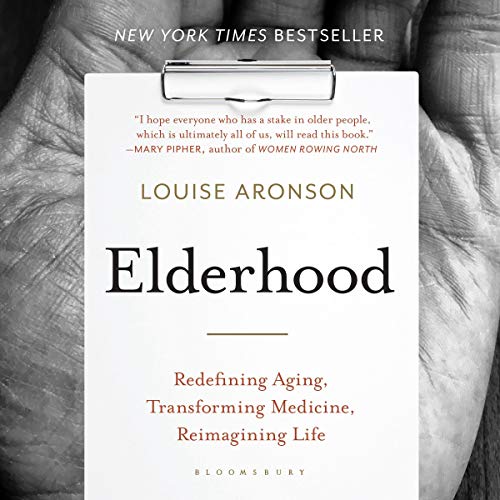 Longlisted for the Carnegie

As revelatory as Atul Gawande’s Being Mortal, physician and award-winning author Louise Aronson’s Elderhood is an essential, empathetic look at a vital but often disparaged stage of life.

For more than 5,000 years, 'old' has been defined as beginning between the ages of 60 and 70. That means most people alive today will spend more years in elderhood than in childhood, and many will be elders for 40 years or more. Yet at the very moment that humans are living longer than ever before, we’ve made old age into a disease, a condition to be dreaded, denigrated, neglected and denied.

Reminiscent of Oliver Sacks, noted Harvard-trained geriatrician Louise Aronson uses stories from her quarter century of caring for patients and draws from history, science, literature, popular culture and her own life to weave a vision of old age that’s neither nightmare nor utopian fantasy - a vision full of joy, wonder, frustration, outrage and hope about aging, medicine and humanity itself.

Elderhood is for anyone who is, in the author's own words, 'an aging, i.e., still-breathing human being.'

What listeners say about Elderhood

Well written but too long

Well written book. Great ideas. Reading was excellent. But the book went on far too long for my tastes.

I loved this book. It was paradigm shifting, eye opening, and thought provoking. It changed how I think about elderly people, and it may even change my elderhood when I get there. It was also a wonderfully scathing look at the American medical system. As someone who has been injured by a pharmaceutical I felt validated by the author's reflections on the medical system that she is a part of. I recommend this book to all.

Better Care for the Elderly

Rather long, repetitive and slow. However, the author’s message resonates with me and is important. Our medical system in the U.S. badly needs repair, especially for the older folks among us.

this book is filled with great information
I am all about my seniors. I hold my Bachelors in Human services with a focus in gerontology and was a CNA for four years....I love learning everything about aging. this book was amazing and will be listened to again!!!

A Primer On Caring for Older Adults

I'm a physician who has practiced geriatrics and believe Dr. Aronson's book is an excellent primer for the caring of older adults in the United States. The author is critical of current practices and offers reliable, practical and pragmatic solutions. It is not easy reading (listening) and has its depressing ;sections and moments; I had to listen to the book in short sections. One of my suggestions is to alternate listening to this book and another one that would be more diverting. I recommend this book, along with Arrowsmith (Sinclair Lewis) as required reading for first-year medical students.

A Map for Our Third Act -- Elderhood

I listened to Elderhood as I'm navigating life supporting my 90-year-old mother and 94-year-old father. I'm in the thick of it. I'm grateful for the empathetic companionship, vision and advocacy of Louise Aronson as I strive to honor my incredible parents as they grow more vulnerable and more dear. I'm grateful for her calls for systemic transformation in our healthcare institutions. Hers is a much needed voice in these times.

I am so glad I have both the book and Audible version. We!! done, very important subject. Must read for all ages because if we live long enough we will have lived most all of the chapters in the book. A necessary read for all human beings.

This book is insightful and helped me to see differently about getting old. I recommend this book of all ages.

Every person over 70 should read this. it is a guide to the medical needs that we face as we get older, and coming from a physician makes it even better. Many case histories and interactions give us information to ask questions and make better choices when decisions need to be made. Her humanity was comforting. I love the elderly, too.