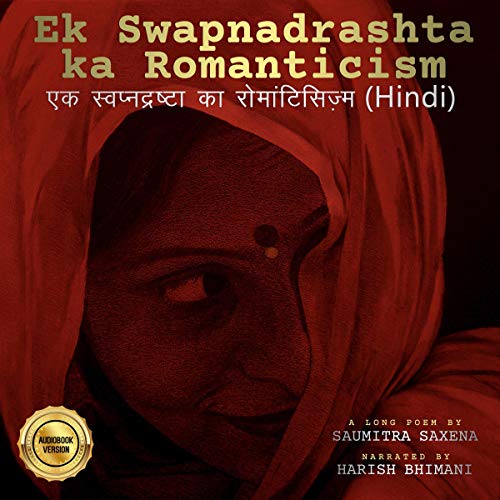 By: Saumitra
Narrated by: Harish Bhimani

Ek Swapnadrashta ka Romanticism or The Romanticism of a Dreamer is a long poem by Saumitra Saxena written in Hindi. The audiobook narrator is Harish Bhimani.

If we think of long poems, Nirala's 'Ram ki Shaktipuja,' Trilochan's 'Nagai Mehra,' Muktibodh's' Andhere Mein,' 'Patkatha' by Dhumil, and 'Lukman Ali' by Saumitra Mohan at once spring to mind. You may also find long-poems by Vishnu Khare, Leeladhar Jagudi, Chandrakant Devtale, Man Bahadur Singh, and Bhagwat Rawat, but any search for the genre after them leaves you empty-handed. The present poem by Saumitra may be taken as the next page of the Hindi poetic tradition. Entering the core of the poem, one feels the poet's anxiety about the present. And what exactly is that concern? Racial violence, estrangement, loss of freedom, pillage, genocide, bloodshed in the name of religion, struggle for dominance - these are the burning issues that have not only taken hold of today's India, but the entire world.

These are the flames devouring natural human values like freedom, love, and sympathy. Saumitra is a dreamer who has nothing to lose but a world to gain - who yearns for peace, tranquility, and freedom for the entire humanity. He gives form to the contemporary tragedy through miniature images and pictures. The truth of today's life is not presented here through some romantic perspective, but rather through that eye for a reality in which sages like Abraham Lincoln, John Hus, and Mahatma Gandhi had to lay down their lives for the sake of freedom, love, and unity.

This poem, written in simple, straightforward diction, presents the blood-smeared history of human cruelty, in the backdrop of which, despite hopelessness, there is yet enough sparkle of hope to make a man stand up again. Actually, it's the quality of our native tradition which has been conveyed through a unique mode of expression.