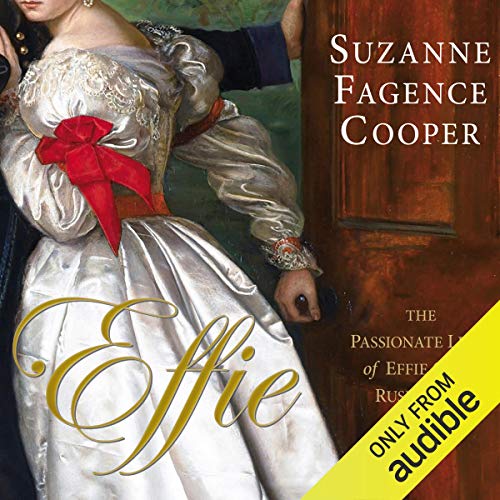 Effie Gray, a Scottish beauty, was the heroine of a great Victorian love story. Married at 19 to John Ruskin, she found herself trapped in a loveless and unconsummated union. When her husband invited his protégé, John Everett Millais, away on holiday, Effie and Millais fell in love. She would inspire some of Millais' most haunting images and embody Victorian society's fears about female sexuality.

Suzanne Fagence Cooper has gained exclusive access to Effie's family letters and diaries to reveal the reality behind the scandalous love-triangle. Effie shows the rise and fall of the Pre-Raphaelite circle from a new perspective, through the eyes of a woman who was intimately involved in the private and public lives of its two greatest figures.

What listeners say about Effie: The Passionate Lives of Effie Gray, John Ruskin and Millais

I would highly recommend this book to anyone interested in history; especially the Victorian era

What was one of the most memorable moments of Effie: The Passionate Lives of Effie Gray, John Ruskin and Millais?

Learning more about John Ruskin the person rather than the art critic. I have always admired the work of Ruskin, but this book helped delve deeper into the man; I did not really like him as a person, but perhaps understood him better.

Which character – as performed by Sophie Ward – was your favourite?

Sophie ward did try to portray the characters by using accents, although the book is written as more of history story rather than a novel.

I guess I had an emotional reaction to the book in that I thought about the limited choices women had in Victorian England. I was also amazed and rather impressed by how adventurous the Victorians were in their travel destinations, especially given that travel was not easy and often dangerous.

I really enjoyed this book much more than I thought I would. I thought at first it would be a little dull, but I stuck with it and often found I was transported back to Victorian England. Because the book is written using diaries it brings to life the sights and experiences of individuals, and I was compelled to seek out portraits and paintings to help me visualise the people referred to. They became three dimensional through this book and I really became absorbed in it. If you like history, and are interested in art you will enjoy this book. I think it would make a great movie at some point and with the soon to be released movie about Turner will compliment this area of interest.