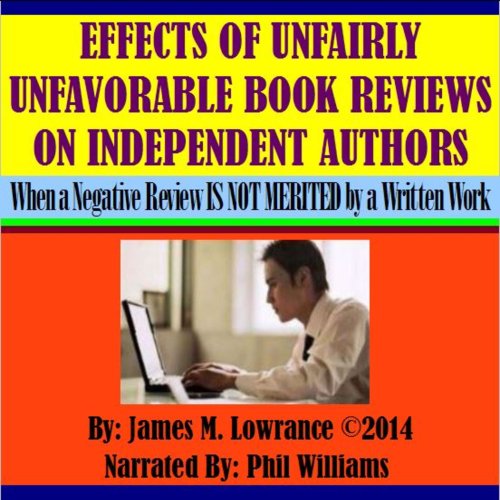 On a particular popular social media reviews site, where reviewers are allowed to classify books in their shelving options under terms such as “d**k head literature”, comments toward this very book, included my being told to “castrate” myself, my being called “an a**hole” and being told to “die in a dark hole”. I am only citing scant-examples and these type comments are far more reaching in the negative and offensive directions than I can even begin to convey (Hence: “Unfairly Unfavorable”).

Important: Most book reviewers are good, honest people. Just because a reviewer is harsh, this does not make them a bad or dishonest reviewer. I do believe however, that there are stark differences between harsh reviews and attack reviews or those that are directed at authors personally. I believe it is wrong for authors to attack reviewers as well. Authors should see no need in replying to reviews or reviewers, unless there is a legitimate reason to do so (very rare - usually only to point out a major mistaken perception within a book). I also do not believe authors should reply to reviewers with “thank yous”, unless under special circumstances because this would mean that honest, critical reviews should also deserve a “thank you” and a bias toward positive reviews would be evident and unnecessary (readers already know that authors prefer positive reviews).

As should be noted by the title of this audioook, I mainly address and discuss “unfairly unfavorable” book reviews that are posted against independent (indie) author's books and eBooks and not those that are earned and deserved by them (negative reviews are merited in most cases, while some are 'undeserved'). Some of the content in this audiobook, I have derived from posts I made on a publisher's forum, which I have rewritten and edited into headings for it. The fact that undeserved negative reviews are posted online by readers on bookseller websites, is evident by the fact that same books at the same time, can have highly favorable and positive reviews posted for them by other readers. (Note: This is not always a proof - I'm pointing out a general observance, that might indicate that a negative review found among predominantly positive reviews, is posted for inappropriate reasons.)