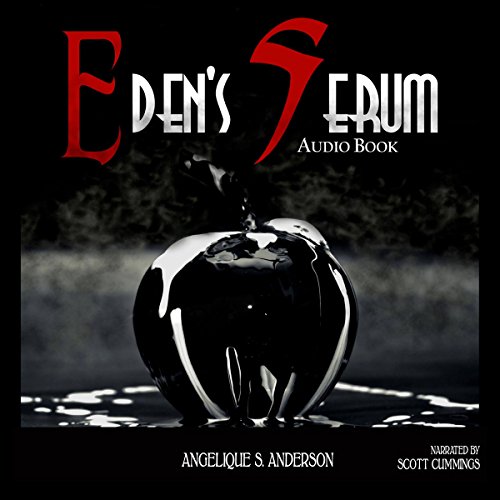 Adam has almost everything he could want. He's an up-and-coming corporate president with his own division in a successful tech company. Adam's also one of the few people on the planet who can afford to buy what everyone wants: Immortality.

Taking Eden's Serum guarantees that Adam will live forever. But is it all that it has been advertised? Adam's new assistant, Evelyn, is an enigma who is determined to help him. When people are murdered, Adam and Evelyn set out to solve the mystery of Eden's Serum. But will it be too late for Adam?

A cybertech thrill ride that takes you into a shocking future, Eden's Serum is the first book of the Eden series.

What listeners say about Eden's Serum

This is an enjoyably, fast paced, sinister Sci-fi story whose premise would make a good TV series or movie. It is set in the near future, with monitoring of all personal data and assets via a disc created by our protagonist, Adam, an exclusive serum that gives immortality to those who can pay, and a series of murders that might connect the two. Scott Cummings does an excellent job of narrating the audiobook. He gives the characters individual voices and brings the story to life by imparting emotion and tension in all the right places. Even though the science is dubious, it is not so out there that it ruins the story, the conspiracies and the twists in the plot keep your attention and the inclusion of romance is a nice touch that also helps Adam reexamine his life's goals. This is a story of greed, corruption, murder, self discovery and romance that kept me entertained from start to finish. I received the audiobook at no cost and under no obligation to review.

If you could sum up Eden's Serum in three words, what would they be?

Which character – as performed by Scott Cummings – was your favorite?

Eden’s Serum by Angelique Anderson is an amazing titillating adventure from start to finish. From the very first page, you are submersed into the world of Adam and at a maddening pace.

Adam is a wealthy executive who has everything…everything but immortality. Now, even that can be bought. But at what price? He soon finds out that the “serum” is more than what he originally believed, as are some of the consequences associated with it.

This is a wonderfully innovative light sci-fi novel. The plot is rich with some pleasing surprises. I DO love great twists and turns in a plot.

Scott Cummings narration was fantastic and truly brought the characters and emotions to life.

Eden’s Serum is a great novel containing a bit of everything! I am definitely looking forward to the next book and more from this author.