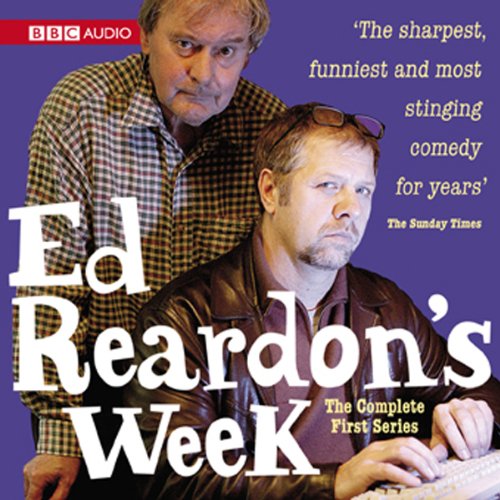 Ed Reardon (played by Christopher Douglas) is a failed writer, fare-dodger and master of the abusive email. Living with his cat in a one-bedroom flat, this bearded divorcee grumbles at a modern world seemingly run by 12-year-olds, while churning out books such as Jane Seymour's Household Hints and Pet Peeves (to pay the bills) and trying to live off the royalties of his 1982 episode of Tenko (£17 per annum). We track Ed's attempts to gain the literary success he feels is due in this painfully funny and extraordinarily clever sitcom.

Ed is a recently divorced writer in his 50s, living the life of a hack-writer and scraping for cash and food as he goes.

The writing is scrumptious and the performances are very, very good and as it's a BBC production, the technical production and quality are superb.

Each episode can be seen as a standalone but there are running themes and arcs to link it all very nicely together.

The cast, lead by Christopher Douglas as Ed, are without doubt one of the best I've heard since the Hitchhikers Guide - speaking of which, listen out for Geoffrey McGivern in various roles - it's like a little game of 'Where's Ford Prefect?'.

More importantly it does have massive re-read (or re-listen!) appeal. The stories really do lend themselves to repeat visits.

Painfully funny poke at publishing and the media

If you've ever entertained the idea of writing for a living, or set foot inside a publishing/media house, this should strike a chord. The grumpy old writer, fallen on hard times, drinking his Cotes de Rhone and happiest when puffing a stinking pipe, is a hoary old cliche, but plenty of these guys DO still exist, as Ed does for our entertainment. Ed's air of self-importance reminds me of Frasier Crane in Paramount TV's Frasier, though the characters are worlds apart. I laughed heartily at the character of Ping, his pretty, vacuous agent, and the 'bent jockey' James Derby Magee. for whom Ed has to write an after-dinner speech. If modern life ever strikes you as absurd, listen on... you won't be disappointed.

love it
just listened again after 6 months and still tickles. am going to get the whole lot even though I have heard them all on radio4.

A great start to Ed's adventures (notice the possessive apostrophe). One of the best radio comedies out there, I've got all the available series and listen to them again and again. For those of us of a particular age, the observations made by Ed are both extremely funny but cuttingly correct with regard to the asininity of the modern world.

I write this with my cat on my lap and he's very fond of this too.

If you could sum up Ed Reardon's Week in three words, what would they be?

They would have to be - funny frustrating enjoyable

The performance is excellent and very believable

Tried it on a whim - haven't stopped laughing.

OK, so I should confess I've come late to Ed Reardon's Week, but I've already made it to series 4. Well crafted, subtly timed, and of a consistent - funny - standard. Like Victoria Wood, the humour and observations are on a world immediately observed - so I'm not sure how international they would be - but I feel the characterisation and episode structure can stand up against some of the best - including Yes, Minister. Definitely worth trying!

The trials and tribulations of Ed Reardon and his cat, Elgar, are one of the few comedy series that actually make me laugh out loud. My favourite moments are his asides, usually to correct someone's grammar and these are the moments when you really understand and empathise with him! Good narration. I own 3 of the series and when I can afford it, will be buying the complete series. I've heard them all at least twice on the radio but they are just as funny again.

Great entertainment. The world needs more Eds to keep us aware of the idiocy that we to easily think as normal

lines to laugh at

I played this from start to finish; couldn't stop it's was so funny, I will be getting the next ones in the series.

Comedy writing just does not get any better than this, matched only by the acting skills of those involved. Ed Reardon is perfectly placed to comment on life and boy does he let rip, No one is safe from his acid tongue and he has an opinion, normally a grim one on anything and everything. You find yourself rooting for the guy even though he is always looking for the short cut to success and normally suffers in the process. Simply brilliant in ever way!