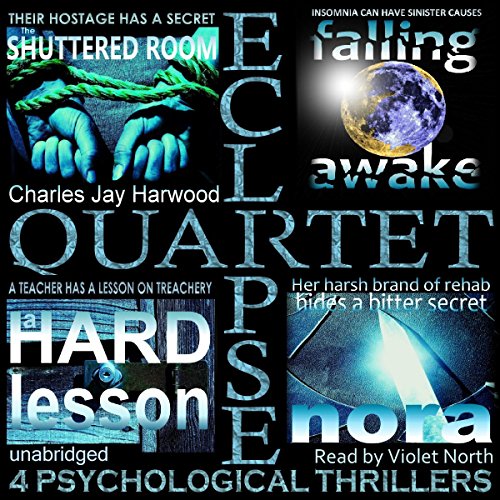 Jessica Fraser would appear to have everything: money, a devoted husband, a lively son, and a fulfilling career. But her life takes a nasty turn when she's taken hostage and incarcerated in an upstairs room by three thugs demanding a huge ransom from her rich father. In a bid to escape, she cuts a hole in the bedroom floor with a cutlery knife. From there, Jess observes the three of them going about their everyday business. That's when she starts playing games with them. That's when her spying pulls her into a treacherous psychological game with her abductors.

Gemma's husband vanishes under mysterious circumstances, leaving only a black contorted doodle and mysterious debts. But saving her home proves the least of her worries after Gemma earns urgent cash by performing routines for a mysterious chronic insomniac.

Nancy is hurled into the world of celebrity when she finds herself performing a shoot for handsome but odious millionaire, Vince, as they walk from one of his nightclubs. But the seduction of this other world sours after Nancy learns the truth behind her 15 minutes of fame.

Sarah thought she was teaching a schoolchild a little English.

How wrong she was.

Not only is her subject a full-grown thug, he's dyslexic and part of a gang headed by a psychopath. And this psychopath doesn't like people interfering with his business.

It is hard to understand the reader. Part of this may be due to her accent, but along with it and the lack of expression, I finally gave up listening into the second book. I am disappointed because I really enjoy a good thriller.

A better experience? I hate to say that a different narrator might make it work. I can't give an opinion about the story because it was so hard to listen to her voice. I had to rewind repeatedly to get what she was saying, which is important because the story kept jumping around a lot. I finally hit Fast Forward several times to see if it got better but it didn't. I forwarded to the next book but it was the same thing.

Has Eclipse Quartet: 4 Psychological Thrillers turned you off from other books in this genre?

No, I love this genre and have read many books that were excellent and hard to put down. But this one just didn't do it. Many times I felt like I should take notes to keep track.

I've listened to many books that have narrators with accents and almost all of them lend to the feel of the story. But for some reason I couldn't connect with her speaking voice and character roles. Many times it was hard to understand even when rewinding a couple of times. When it reaches that point you lose the story.

I didn't get far enough to give it a fair rating.

Would you listen to Eclipse Quartet: 4 Psychological Thrillers again? Why?

I don't generally listen to fictional audiobooks more than once (so many books - so little time!!!) However, I will certainly listen to more audiobooks by this author. And I've just bought a paperback copy of one of the titles in this selection for a friend (who sadly doesn't listen to audiobooks) for Christmas.

What was one of the most memorable moments of Eclipse Quartet: 4 Psychological Thrillers?

There are so many! But maybe the crash in 'Nora' and the art gallery scene in 'A Hard Lesson' stand out for me at the moment.

I think she's a really good narrator. She paces the narration well and brings a lot of tension and emotion to the reading. She 'does' children beautifully.

I bought this selection because I'd already listened to, and loved two of the books in it and this was a good way of getting the remaining two for the price of one. The books may not be for everyone. They are quite psychologically subtle, and most of the action is in the development of the characters and the interplay between them. They're also very unusual. I keep making the comparison with the films of Alfred Hitchcock. That's the closest I can get to what these books are like.... Subtle, sinister, and very real.

Narrator was brilliant.
Very gripping series of books.
Will definitely look for more by this author.
And four books in one for the price us a bargain.

Couldn't resist this for the 1 credit. Really enjoyed the thrillers and the narration was great. My favourites were the Shuttered Room and A Hard Lesson although the pacing slowed a little here and there in the others, but felt this was to build tension. Some unpleasant characters and twists I didn't see coming.

What disappointed you about Eclipse Quartet: 4 Psychological Thrillers?

Narrator sounds like she is talking to a three year old. Characters don't get you interested and the storylines are looooonnnnnggggg

Would you ever listen to anything by Charles J. Harwood again?

Speed it up, talk naturally, act like you are an adult reading a story to an adult.

DON'T EVEN THINK ABOUT IT!!!

What would have made Eclipse Quartet: 4 Psychological Thrillers better?

A different narrator could possibly have made it bearable

Has Eclipse Quartet: 4 Psychological Thrillers put you off other books in this genre?

No, just have to find a better author and narrator

She is the LEAST suited audio reader I have ever come across!