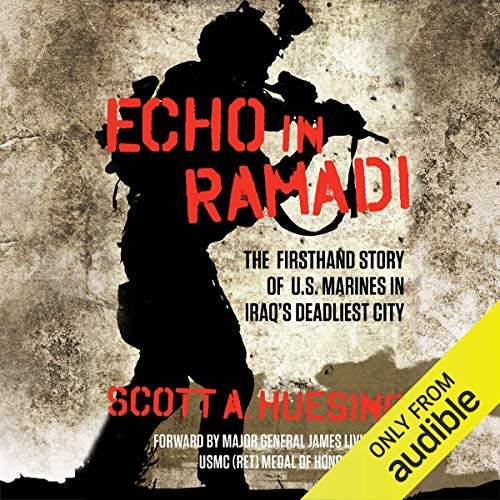 The Firsthand Story of U.S. Marines in Iraq's Deadliest City
By: Scott A. Huesing
Narrated by: David Marantz
Length: 9 hrs and 44 mins
Categories: History, 21st Century
5 out of 5 stars 4.8 (13 ratings)

By: Scott A. Huesing
Narrated by: David Marantz

"In war, destruction is everywhere. It eats everything around you. Sometimes it eats at you." (Major Scott Huesing, Echo Company Commander)

From the winter of 2006 through the spring of 2007, 250 marines from Echo Company, Second Battalion, Fourth Marine Regiment, fought daily in the dangerous, dense city streets of Ramadi, Iraq, during the Multi-National Forces Surge ordered by President George W. Bush. The marines' mission: to kill or capture anti-Iraqi forces. Their experience: like being in hell.

Now Major Scott A. Huesing, the commander who led Echo Company through Ramadi, takes listeners back to the streets of Ramadi in a visceral, gripping portrayal of modern urban combat. Bound together by brotherhood, honor, and the horror they faced, Echo's marines battled day to day on the frontline of a totally different kind of war, without rules, built on chaos. In Echo in Ramadi, Huesing brings these resilient, resolute young men to life and shows how the savagery of urban combat left indelible scars on their bodies, psyches, and souls. Like war classics We Were Soldiers, The Yellow Birds, and Generation Kill, Echo in Ramadi is an unforgettable capsule of one company's experience of war that will leave listeners stunned.

this is a tribute book.well written.

this book has lots of details about the fallen. its a well written book. yes i would read it again. 4☆

Well paced and quality storytelling of US Marines in day to day combat operations in the Middle East. As a Marine Combat Veteran of the Vietnam War this was pretty familiar territory for me listening to tales of combat operations in the 21st Century. Situations and reactions of these modern Marines in Iraq could be interchanged with our combat operations in 1966 I Corps and on through to the Tet Offensive. The Marine Corps seems to not have changed much and that is heartening. The Esprit de Corps prides itself on the ability to meet combat objectives with the same basic skills that have not changed much "From the Halls of Montezuma to...." This book does an admirable job of conveying these events and especially the basic humanity of the men of so-called "Generation Kill".

Touching stories of the lives of our Marines

The Author really takes you into the trenches of what it was like to be in real combat. Such Hero’s! When you are done reading this book you will be grateful for these Men and their sacrifices to keep us safe.

Consider what our soldiers pay for freedom

This book reminded me of the sacrifice and honor our soldiers and veterans are in our lives as Americans. I think reading this made me a better person. And I’m grateful to the author for sharing his truths.

As a young Marine in 2006-2007 in Ar Ramadi I felt this was a complete honest and accurate description and narrative of what life was like there. I wish you and all of echo the best.

Good detail and direct reporting on action 8n Iraq. The delivery of stories about soldiers and their families is heart wrenching. well done. love you boys who serve

This book was one that I could not put down. It gave a detail look inside of what happened over there and what followed after. Emotional at times, tough to listen to at others, but I feel that Major Huesing did an outstanding job telling his and our story. Well done sir!

This candid story about real Marines in a real battle is told in a way that illustrates the Marines lives, the Marine Corps, the friction and fog of war, and the weight of command.

This book is an amazing testament of Marine Corps values and servant leadership. Highly recommended

I found myself tearing up through the stories of those that paid the ultimate sacrifice.

A hard listen with poor narration and a story that seems to jump all over the place making it hard to follow hence only made an hour or so through and gave up!

Enjoyed it all the way though, kept it interesting funny and in-depth with technical and military information.

His point is well put across about PTS and what himself and his men had to deal with, recommended if you enjoy military history/memoirs.

The narrator isn't bad,.does a great job in fact. But always want the author to read it, I feel they bring the tone in correctly and something extra.