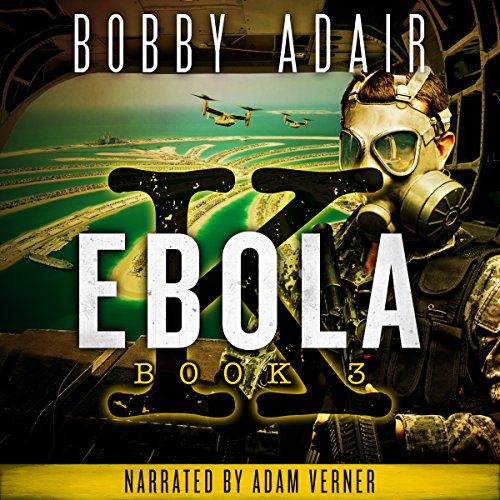 Half the population has died. Many countries have disintegrated, and societies have collapsed. Still, Ebola kills.

Paul Cooper is imprisoned in an Ebola farm, a place where Ebola survivors are forced to donate antibody-rich plasma that will be used to treat the sick, but corruption is rampant and smugglers are everywhere.

Austin Cooper, having escaped from the rebels who'd been holding him for ransom, has been found by Mitch Peterson. Now the pair must trek together across Kenya and Ethiopia toward their separate goals, one to get home, one to finally kill Najid Almasi.

What listeners say about Ebola K: A Terrorism Thriller, Book 3

A clean sweep for the series

The final installation of the Ebola K series, Ebola K (Book 3) continues where books one and two left off. Find out what Austin will do to survive and what his dad will do to keep on living in this action packed conclusion.

Adam Verner narrates Book 3 and does a great job with it. He narrated the entire series and I was glad to see that Adair and Verner teamed up to do the final book. Verner has a really great voice for this type of fiction and really makes each second fly by.

Ebola K (Book 3) is the final book in this series and it felt like it. Not in a tired a worn down way, but Adair did a great job finishing up his story kind of way. I never know how much I am signing up for with some of these series, sometimes it’s 2 books and sometimes its many, many more. Thankfully, Ebola K had a nice 3 book cap on it and I don’t think the series could have warranted any more books. The series was incredibly well thought out and the disease was perfectly described.

The book opens with some “previously in Ebola K” scenes which were a nice way to jump back into the story. A lot of people get to read these books in a row, but many others skip around because they weren’t finished or had other books in their to-read piles. Adair allowed the readers to jump back in without feeling lost.

The action was there and there was a lot of it. Adair didn’t shy away from anything in this final installation. The whole series was a nice mixture of action and actual science. Not too much action to exhaust the readers and not too much science to lose people.

Overall, Ebola K (Book 3) felt like such a wonderful conclusion to everything that was going on in the other two books. Adair didn’t finish with a bang or a whimper. He finished in a way that was incredibly believable and really put the nail in the coffin of this story.