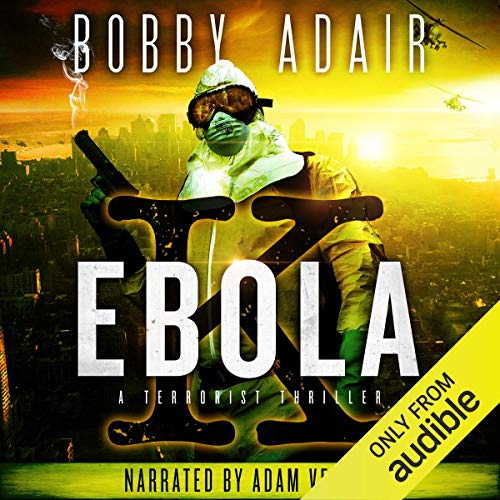 In 1989 the Ebola virus mutated to into an airborne strain that infected humans for the first time on American soil in Reston, Virginia. Through belated containment efforts and luck, nobody died.

Now, in the remote East African village of Kapchorwa, the Ebola virus has mutated into another airborne strain without losing any of its deadly potency.

In this thriller, terrorists stumble across this new, fully lethal strain and while the world fearfully watches the growing epidemic in West Africa as Sierra Leone goes into country-wide lockdown, only a few Americans are aware of Ebola K and the danger it poses—to be the deadliest pandemic in the history of mankind.

Can they do anything to protect themselves from this killer disease? Can they stop the terrorists?

What listeners say about Ebola K: A Terrorism Thriller

Sorry but struggled to get through this one, have downloaded the second though so hopefully it improves. Found it very hard to care about the main character

The story was good but it ended to soon. Felt like there was a few chapters missing even if there were plans for more books otherwise I enjoyed it

Avoid at all costs

This book was shallow, predictable, repetitive. The dialog was laughable. The characters were boilerplate. The narration was poor. It was NOT represented as a Book 1 in a series. I slogged through it to be done with it. IT ENDED PRACTICALLY IN MID-SENTENCE. There was no denouement whatsoever. It was completely obvious that it was just a device to prompt you to buy more. I'm NOT going to buy the second in a series of bad books. I have almost 500 titles in my library and this is just the second time I've taken Audible up on their return policy.

I REALLY liked this one...thrilling!

Would you consider the audio edition of Ebola K: A Terrorism Thriller to be better than the print version?

I think that the audiobook really brings the book to life. I've listened to other audiobooks, and I think the narration on this one is really great...this is a terrible situation we're in with Ebola, and the narrator has a sensitivity to his voice that brings the reader into the story and really emphasizes the suffering going on in Africa.

The book was great...I love how it weaves current events into a really exciting and thought-provoking story. I also loved the characters.

Adam just has a really smooth voice. I like to listen to audiobooks in my art studio, and the pace is great. I can work and concentrate on what I'm doing while being able to follow the story. A lot of other stories seem to be really fast...this one's perfect.

I thought the terrorists were particularly interesting. I think we all have stereotypes from the media in our minds, and I was surprised by a "moment of conscience" experienced by one of the jihadists when he realizes he's gotten himself in too deep.

I would highly recommend this one...

This book seemed simplistic in it's writing, and narrator did not do anything to help. If you want to read (listen to...) a REALLY good thriller and TRUE story, buy The Hot Zone. By Richard Preston. This author even sites this story to build the tension.....just about the only tension, in this book.

It's a decent story. The narrator is good. It's a long buildup to the climax of the story-- you get there, but then there's no ending. Very unsatisfying. I guess the author wants you to buy the next book.

Yes, it's worth the credit

Yes this is a good book and well worth the credit. We are introduced a young American college student in Africa with French and Pakistani fellow students. With that being told you should already know the plot of the book, not that hard to figure out. The student are off on an exciting summer program to open their eyes to a different culture and preform some humanitarian aid. This book takes you on journey that will hold your attention. I won't say more; I hate it when reviews spoil the ride.

Now my gripe. Why oh why can't they write a book any more. The whole industry is now structured so you have to pay at least 75 dollars to read a series. Now if the book is really long, all the better. They stuff just enough words in to make it long enough to get you to the cliff hanger and you have to buy the next book to find out what happens. I swore I was not going to buy anymore trilogies but bought this via phone and didn't register that it was a book 1. If you don't mind spending this kind of money on books that pad the story go for it. At least the padding in this book is very good, you don't feel so used. I did enjoy the book even thou some of the science is a, well, non plausible.

Ebola K did a great job of weaving current events into the narrative for the story, which in the long run may date the book but which worked really well as a contemporary read. Different storylines are introduced and brought together through the book, with some fairly large and hard to believe coincidences finding a pair of Americans who grew up together with very different beliefs in the same tiny little town in Africa at the same time. The story kept you on the edge of your seat (or ladder, in my case, as I listened to it while painting) although fair warning, it will leave you with a cliff hanger and no real resolution.

I thought that this book was really well performed by Adam Verner who did a good job making it obvious who was speaking and was a pleasure to listen to.

I struggled with this book and in the end couldn't finish it The narrator made the book seem like a documentary, I couldn't tell if I disliked the story or narrator more

COULD IT BE AIRBORNE?

IS IT EBOLA?
When this first started out, I thought it was going to be real good. We were even going to get to see what drives a person to become a terrorist. Then after the first six chapters we start getting all these lectures. We learn all the stats on deaths in Africa. Very detailed stats. Americans take a real big hit. We have no worries, especially compared to Africans. We have telethons and think all is well.

Talk about it, Talk About it, Talk About it.
This is advertised as a thriller. I have read a lot of thrillers and this is not a thriller. This almost belongs in Great Courses. The main characters spend a lot to time talking about things. They do a lot more talking then doing. The reader knows that they are dealing with Ebola, yet the characters can't make up there minds. The reader knows it is airborne, but that is also debated by several different people in several different locations. Adair keeps acting like he is building suspense, yet the readers already know, so what is suspenseful? This is more documentary then novel. It is not bad it is just not what I thought I was buying.

The narrator is okay, but the more bored I got with the lack of story, the more the narrator started to get on my nerves. He started to sound very condescending.

After reading the book, I wasn't too excited for the audiobook version, but once I started listening, it brought back all the fear, drama, and excitement of the book. Couple that with similar current events in the news, and that makes for an unforgettable mix!!

Would you consider the audio edition of Ebola K: A Terrorism Thriller to be better than the print version?

Yes, but with warning about the narrator!

The plot was like listening to the current news! It was super fresh and up to date! It felt like it could really happen at any moment!!!

Unfortunately, I just didn't like his voice. Was a bit too nasaly for me. I didn't like the pauses or the changing voices for each character. Nothing personal!

Love his imagination with this and zombies!!! Very entertaining!!!!

I have been reading about EBOLA since 1996 especially microbiology research. The book speak the true.