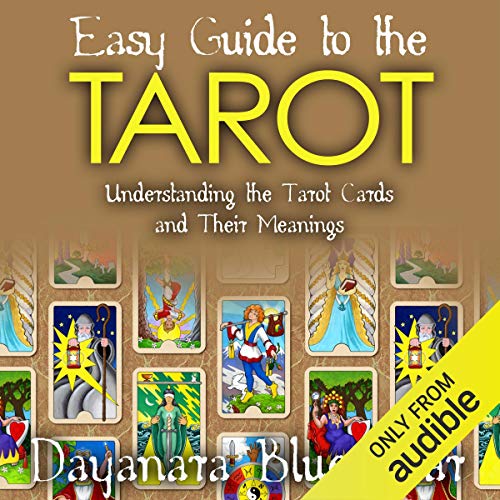 Easy Guide to the Tarot

By: Dayanara Blue Star
Narrated by: Adam B Crafter
Free with 30-day trial

The tarot is a pack of 78 playing cards used by mystics and occultists for foretelling the future as well as for giving you a peek into your spiritual and mental pathway. Tarot cards have existed since the mid-15th century in various parts of the European continent. However, at that point it was basically used to play card games such as French tarot or the Italian tarocchini.

The cards seem to have come from Mamluk, Egypt, in the 14th century. At that point in time, the suits were Staves, Cups, Coins, and Swords - quite similar to the suits that exist these days.

In Europe the first tarot card deck was created in Milan, Ferrara, and Bologna in Northern Italy. This was between the years 1430 and 1450. The original purpose of the tarot was to play games. In the 18th century, the tarot began to be used for divination purposes. Manuscripts from the era reveal that there was a specific way of laying out the cards, and there was a divinatory meaning associated with each card.

The tarot has four suits, but this can vary depending on the region. Jean-Baptiste Alliette, popularly known as Etteilla, was the first to create a tarot deck especially for the purposes of divination. This 78-card deck has two distinct parts.

Take advantage of this great opportunity to understand the tarot quickly and easily!

What listeners say about Easy Guide to the Tarot

other than skipping the 10 of swords was very informative. I do want more explanations of tarot.

Easy to listen to.

Would you listen to Easy Guide to the Tarot again? Why?

Yes. I do not always remember things the first time I learn them, so it is good to have a book that I can listen to time and again, until I feel comfortable with the lesson. Adam Crafter is easy to listen to. In fact, the decision to purchase this book was made easier because I saw that Adam Crafter was the narrator.

The Tarot seems unique to me, so I can only imagine comparing it to other Tarot audio books. I know of no other such books.

What about Adam B Crafter’s performance did you like?

Adam Crafter's voice is easy to listen to. He is like listening to a long-time friend.

If you are interested, please listen to the sample.

Would you consider the audio edition of Easy Guide to the Tarot to be better than the print version?

It's best to have both because there's a lot of information to absorb, and the print/kindle version can be a good reference guide while the audiobook can be used for a general overview and as a refresher.

I haven't seen other audiobooks on Tarot cards. This one is quite unique.

The information is very interesting, and Adam Crafter's narration is perfect for an instructional book. Of course, don't expect to remember everything from the first listening. Having the print/kindle book to go along with the audiobook is a good idea.

Good, Thanks for Meanings of TAROT

well read, well done, easy to listen to, exactly what I was looking for TWO THUMBS UP, THANKS!

Would you consider the audio edition of Easy Guide to the Tarot to be better than the print version?

Did not read the print version. I have a very busy lifestyle and audible books enables me to still enjoy books without interfering with the tasks I need to get done.

I really enjoyed hearing and learning about the different cards of the tarot.

Did Adam B Crafter do a good job differentiating all the characters? How?

There were no characters to deferentiate. Adam was very clear, but there was no feeling in his reading. He spoke in a monotone thru the entire subject matter that made it hard for the listener to get excited about it. I got the feeling he didn't enjoy the subject he was talking about and his over pronunciation of th's made me really glad he wasn't face to face with me or he'd be spitting all over me. Also the 'E' in the word strength is pronounced with the long 'A' sound not the short 'E' sound. That was a little annoying but I enjoyed the subject matter in spite of all this. I would attribute that to the author's writing.

Tarot Cards and Their Meanings

While I can appreciate the learning the meanings of each individual card, it would also be helpful to learn a little bit about laying them out for divination and the meaning of each placement. For example; learning about the Diamond Layout, the 2 Choices Layout, or the Celtic Cross would be helpful too. It would go a long way to understanding the cards meanings better in relation to their placement in these layouts.

Good for beginners. Skimpy info on many cards.

A good quick overview of what the cards and suits mean. Some cards go into more details than others. The swords in particular were rushed and not very informative. Still, a good listen for someone who's just starting out.

What made the experience of listening to Easy Guide to the Tarot the most enjoyable?

BRAVOI have been waiting for a book like this, LOVE IT

One of a kind so far in Audio.

Have you listened to any of Adam B Crafter’s other performances before? How does this one compare?

What insight do you think you’ll apply from Easy Guide to the Tarot?

Listen to it if Tarot interest you.

Message for the Ten of Swords is missing. Narration went from the Nine of Swords to the Paige of Swords.

Missing the 10 of Sword meaning and overview

Missing the 10 of Sword meaning and overview, but other than that... great job. I connected with the meaning

I was recalling hoping for a bit more than the reference books of my decks or a quick Google of each card could give me. If you want someone to basically read a guide book then this is fine. But I really was hoping for more about underlying themes (like how the suits and the court cards interact creating the meaning behind specific cards).

All I got was basic: this card means this.

For me, that's rote memorization and will happen over time and this book offers nothing unique or helpful.

10 of Swords was missing.

it was ok... didn't learn anything new and the 10 of Swords seemed to have been skipped.

If you could sum up Easy Guide to the Tarot in three words, what would they be?

This is a very good audiobook but what is disappointing is they have missed the ten of swords out altogether, I would have given five stars had it not been for this

Have you listened to any of Adam B Crafter’s other performances? How does this one compare?