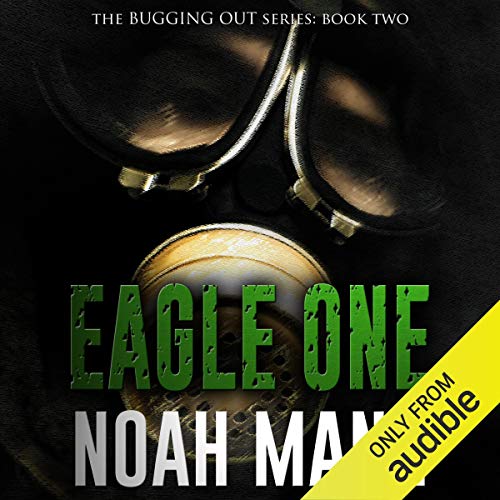 The second book in the Bugging Out series

An apocalyptic blight has long since turned the green earth grey. The world's few survivors face a never ending search for food, and a constant fight against those who have cast aside all morality in a bid to survive.

But in the midst of the worldwide horror, rumors of a sanctuary spread. Eagle One, the enigmatic destination, might be the last hope for civilization. If it can be found.

Eric Fletcher, who has reunited with his friend, Neil, at his Montana refuge, is planning to set off in search of Eagle One when the spring thaw comes. But an unexpected attack forces an early departure, thrusting the friends and those traveling with them into a battle against the darkest parts of humanity that cling to existence.

What listeners say about Eagle One

I can't wait for the next book!<br />Non stop listem!l

I couldn't fall asleep listening to this story. I enjoyed every minute?
Listening non stop for so long however, gets expensive.
The narration was very well done.

Great story! Could not wait to get the next one!

What did you love best about Eagle One?

I loved the story and the characters.

Neal, I love military men I married one.

Would you listen to another book narrated by Mark Westfield?

He is not my favorite but the story is so good it is worth it.

I am not an emotional person so no.

gets a little boring close to the end

the story starts to lose intrest and almost feels like he is grasping to finish out the book. I do like the series so far and am interested to see where the story goes but please keep it a little more interesting

Improved. But not there yet

Narraration improved from the first book. So did the writing style. Still kinda flat. A lot of wishful thinking but not plausible. At all. Especially the deal with Portland. A lot of potential could of been tapped for more entertaining story but was just rolled over.

struggled with this book

The idea behind this book series is interesting, book 1 was ok, book 2 fell short for me. Between the narrator and/or the way the author wrote the book, there is something off that has caused me to lose interest.