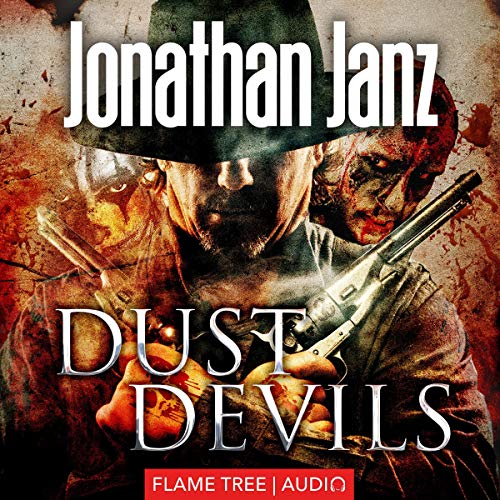 When traveling actors recruited his wife for a plum role, Cody Wilson had no idea they would murder her. Twelve-year-old Willet Black was just as devastated the night the fiends slaughtered everyone he loved. Now Cody and Willet are bent on revenge, but neither of them suspects what they’re really up against.

For the actors are vampires. Their thirst for human blood is insatiable. Even if word of their atrocities were to spread, it would take an army to oppose them. But it is 1885 in the wilds of New Mexico, and there is no help for Cody and Willet. The two must battle the vampires - alone - or die trying.

Flame Tree Press is the new fiction imprint of Flame Tree Publishing. Launched in 2018 the list brings together brilliant new authors and the more established; the award winners, and exciting, original voices.

What listeners say about Dust Devils

Horror Westerns are few and far between and even fewer of the quality of DUST DEVILS. What first starts out as a good western with likable characters, a group of traveling actors come to town who are much more than they first appear to be and the horror begins!

Vampires have taken many forms throughout the centuries since the myth surrounding them came into being. Often they're portrayed as noble gentlemen, full of charm and chivalry, and more recently they've been portrayed as moody teenagers, either rocking torn jeans and leather jackets or--worse--SKINNY jeans and sparkling skin. There's also a plethora of other types who've fallen somewhere between these incarnations, making it clear that the vampire--at least as conjured in the minds of authors and filmmakers at the forefront of popular culture--is capable of shifting its form into many different archetypes as writers strive to keep the mythical creatures relevant and fresh.

For myself, I've always preferred the more monstrous imaginings of the beasts. And make no mistake, beasts they certainly are, no matter how they are portrayed or how the unfathomable gold flakes--somehow embedded in their skin and ONLY visible in sunlight--sparkle beneath the open sky. We're talking about monsters who hunt people and drink their blood. About abominations who force victims to drink blood from their own flesh so as to turn them into immortal creatures of the night, damning their souls and unnaturally sustaining themselves on the flesh and blood of the innocent. Ray Garton's masterpiece LIVE GIRLS comes to mind when I think of the monstrous vampire, which is still one of my all-time favorite imaginings of these undead fiends. Sex show dancers giving more than just a happy ending to the voyeurs who frequent their establishment, while running a night club which serves its vampiric patrons cocktails of blood while excited partyers are turned horrifically or devoured entirely in the back. THAT is the kind of vampire I like to read about and see in my movies, no matter the popularity of pale heartthrobs with a CGI sheen. You can keep that crap, thank you very much.

In Jonathan Janz's DUST DEVILS we are treated to the kind of vampire that vampires are SUPPOSED to be: unsympathetic, ruthless, soulless monsters.

We start out right in the thick of the action with our protagonist Cody watching from afar as the vampires roast and devour a family. He soon encounters a young boy named Willet who wants revenge on the monsters for killing his family. Cody too wants revenge because the vampires--who use the cover of a traveling band of actors--have seduced his beautiful but also shallow and cruel wife away from him to become a star in their shows, where she's ravaged sexually on display for entire towns to watch. It's 1885, and in the wilds of New Mexico, the law is sparse and no one will believe what the creatures are.

Then the vampires are hunting down Cody and Willet as they flee from town to town, all the while trying to formulate a plan to take them down and kill them all, at any cost.

I'm a HUGE fan of Jonathan Janz. If you follow my reviews either here or on my website, you're quite aware of that. As this is my seventh outing into the mind of Janz, I've come to expect strong characters with real human interactions and pains that elevate the stories above their basic premise and deliver literature that grabs hold of you deep down and pulls at your heartstrings while coating you in a thick film of glorious gore and wince-inducing descriptions of pain and suffering. DUST DEVILS is no different. It starts off with a bang and it never lets up for an instant. The setting in the Old West was perfect for this story, removing widespread communication and the presence of overwhelming law and order from the equation so that we get to focus on our wary hero as he attempts to rise to an occasion he neither wants nor is prepared for. While Janz doesn't spend too much time on describing the glorious horizons or the gritty landscapes in the way classic westerns tend to do--making the environment another character in the story--I didn't think it was necessary for this book. It wouldn't have added much. We all pretty much have a good idea of what the New Mexican desert would have looked like in 1885, and Janz knows this. So instead of retreading that territory and giving us redundant descriptions of what we already know is all around the characters, he keeps the focus on the action and the pursuit. And I, for one, am glad he did so.

There's hardly a moment to breathe throughout this bloodbath. The pacing was intense and the characters were formed just so to keep things galloping along and providing surprises and twists along the way. Yet, in spite of this breathless pacing, we still get a terrific character study of a young man who feels inadequate and like a failure to his father, his hero. We also get a terrific arc in Willet, the young boy who has lost his entire family and though he is consumed with revenge, is still a sweet boy with a good heart deep down.

There's also the terrific Marguerite, who comes into the story in its second third and brings a powerhouse female protagonist who helps to bring even further intensity to the story as feelings between her and Cody develop.

Old West Vampires may well be a new favorite iteration of the creatures for me, and their uncompromising viciousness and cruelty is what makes them so strong as antagonists. Nobody cares about vampires hunting deer in the Pacific Northwest, sparkling beneath the sunlit sky, I don't care HOW many teenage girls squeal and fawn over them and their Native American werewolf competitors! Sigh...that's another story, though. For DUST DEVILS, we're treated to a terrific feast of monsters rending the flesh of cowboys and prostitutes and families, and I found it to be purely and absolutely succulent (pun intended).

For fans of vampire novels, jump all over this one. For Westerns, if you can appreciate horror with your wide open skies, dive in. For anyone else, please, for the love of God, develop some frigging taste and start reading Jonathan Janz's work immediately to cleanse yourself of such fragile sensibilities. And why not start with DUST DEVILS? It isn't my favorite Janz novel, but that's hard for me to really explain, because they've all been 5-star blockbusters as far as I'm concerned, and this one is no different.

The narrator did an excellent job, I'd listen to him again in a heartbeat.

Crack open the canteen of the neck of the person next to, grab a few sips, and read DUST DEVILS. Now.