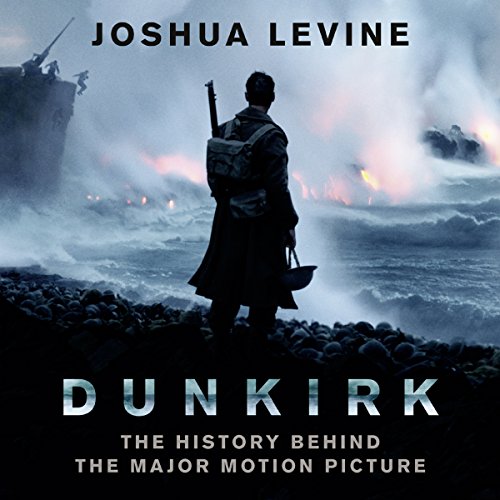 In 1940, at the French port of Dunkirk, more than 300,000 trapped Allied troops were dramatically rescued from destruction at the hands of Nazi Germany by an extraordinary seaborne evacuation. The true history of the soldiers, sailors, airmen and civilians involved in the nine-day skirmish has passed into legend. Now the story Winston Churchill described as a 'miracle' is narrated by best-selling author Joshua Levine in its full sweeping context, including new interviews with veterans and survivors.

Told from the viewpoints of land, sea and air, Joshua Levine's Dunkirk is a dramatic account of a defeat that paved the way to ultimate victory and preserved liberty for generations to come.

What listeners say about Dunkirk

This book combines the evidence based history of the Dunkirk evacuation with a commentary on how it was turned into a film. Many detailed individual stories are included in the overall story of improvisation, muddle, perseverance and courage.

Like the film, this book is about the human stories. The style of writing and tone of reading are light. This makes it an interesting and absorbing read.

Joshua Levine's detailed account of Operation Dynamo (the Dunkirk evacuation) is a great accompaniment to Christopher Nolan's outstanding film. I enjoyed the interview with the Director at the start, along with the discussion of how the film was made at the end.

Levine also takes you through the events that led up to the evacuation of the British Expeditionary Force, along with informative accounts from the land, sea and air.

Helpful background to the experiences seen in the film. A captivating history lesson in events that shaped the free world.

I listened to this in anticipation of the movie release. The book featured an interview with the director Christopher Nolan which I enjoyed. I liked the wide scope that the author took. How and why Dinkirk happened, personal accounts and the nation impact of the event. I really like the book for its historical content but it also had an extra chapter at the end about the making of the film, about their challenges and how it gave them a greater understanding of the people involved.

What was one of the most memorable moments of Dunkirk?

What about Jonathan Keeble and Leighton Pugh ’s performance did you like?

I enjoyed Jonathan Keeble's performance so much I checked my audible library to see if I had unread books narrated by him.

I felt for the boys who walked out into the sea because they wanted to go home.

I was hoping to enjoy this book as a prelude to the film. I did, however I also enjoyed it as peice of non-fiction history. The author presented the subject very well and it's was wonderfully narrated. I feel educated on the subject and wish I could go visit Dunkirk itself. I also feel very greatful to a wide variety of people who sacrificed a great deal. As a reader of WW2 history it was nice to see so many little British successes.

This book is affiliated with the motion picture Dunkirk (2017). It details the mass evacuation of the English army (and some French) from France in world war two. This is an evacuation which has gone down in english folk law about the ‘plucky little boats’ coming to the rescue of the bulk of the army who were on the brink of collapse. The book briefly details the events up to the crisis affecting the army, we hear about the swift decisiveness of the german army which was ruthlessly conquering each country and nation it encountered. The German army was now moving through France, a country which at the point of Dunkirk was on the verge of collapse and capitulation. An interesting and informative read; a good book for those who want a basic understanding of this period in history although this book does lack any substantive depth. This is also a good book for those who have watched Dunkirk as it details the making of the film and ‘behind the scenes’ with some of the challenges encountered by the production team.

A huge amount of detail is given leading to the evacuation. The book relates why the retreat was necessary and the ad hoc planning that led to the miracle of getting so many soldiers back and which contributed to keeping the island safe. The book also illustrates the huge care taken to make the film bringing out the bravery of ordinary folk in taking part in the rescue. The book will appeal to a wide range of readers. It is beautifully narrated.