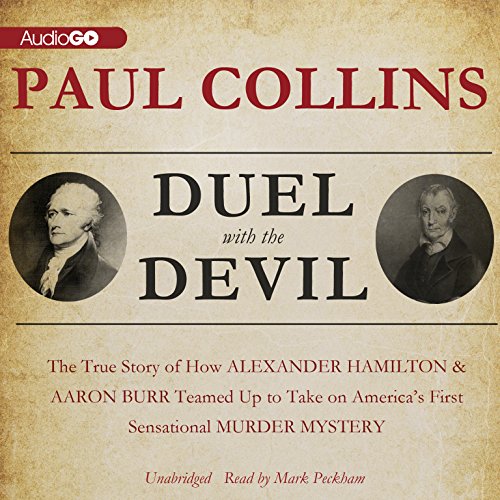 Duel with the Devil

In the closing days of 1799, the United States was still a young republic, its uncertain future contested by the two major political parties of the day: the well-moneyed Federalists, led by Alexander Hamilton, and the populist Republicans, led by Aaron Burr. The two finest lawyers in New York, Burr and Hamilton were bitter rivals both in and out of the courtroom, and as the next election approached - with Manhattan likely to be the swing district on which the presidency would hinge - their animosity reached a fever pitch. Until, that is, a beautiful young woman was found floating in Burr's newly constructed Manhattan Well. The accused killer, Levi Weeks, was the brother of an influential architect with ties to both men, and the crime quickly became the most sensational murder in the history of the young nation. With the entire city crying for Levi's head, the young man was in danger of being hastily condemned without a proper hearing. And so America's two greatest attorneys did the unthinkable - they teamed up.

What listeners say about Duel with the Devil

Fascinating Back Story of VP Burr and A. Hamilton

Politics have always been a dirty business . . . listening to Duel with the Devil was eye opening . . . America was a new nation, freshly out from under British rule . . . Vice President Aaron Burr, serving under President Thomas Jefferson challenged Alexander Hamilton, the first Secretary of the Treasury and one of the founding fathers to a duel . . . because Hamilton has smeared his name in the race for Governor of New York . . . wild and crazy . . . no different than our political schemes of today . . . the story of the young Quaker woman found in Burr's newly constructed well, and the trial of her fiance, Levi Weeks was interesting, as the first sensational murder mystery of the young United States . . . Levi was guilty by the court of public opinion, even before being tried, but the unlikely team of Burr and Hamilton defending Levi Weeks was brilliant . . . highly recommended . . .

The Trial of the Century

The book opens with a vivid description of life in New York City with the water unfit to drink, problems with sewage and yellow fever is raging not only in New York City but all along the Atlantic coast.

The case is about Levi Weeks, a carpenter accused of strangling Elma Sands, a young Quaker women and dumping her body in the well. She went missing on December 31, 1799 and the body was found on January 2, 1800. The case was politically charged because of the Manhattan water supply problems and the debates of how to solve Manhattans water supply problem.

One of the items that helped propel the case into such notoriety was the famous defense team. The team was headed by Henry Brockholst Livingston who went on to be a Justice on the Supreme Court, Alexander Hamilton who was the leader of the Federalist and Aaron Burr who headed the populist Republicans. These three men were the most famous attorneys in Manhattan at the time. They were constantly opponents but this is a rare case that they joined together for the defense in a murder trial.

Collins reveals that the defense attempted to prove that Richard David Croucher known as “Mad Croucher” who was accused of rape was the actual killer of Sands. I will not give away the trial and ending, you need to read the book. I did learn that rape of women was not a crime in the 1790s but civil suit could occur as a violation of a man’s property i.e. husband or father.

The book is well written and meticulously researched. Collins used newspaper accounts, private diaries, court documents and Alexander Hamilton’s papers contained detailed records of the case. The book reads like a novel rather than a historical account and also gives a good picture of what life was like in Manhattan in December 1799 and early 1800.
Mark Peckham narrated the book.

A well researched 18th century crime drama that adds a lot of detailed history about life in early America. Narration not the best compared to other Audible books.

Sort of clunky setting up the story, which actually is quite good. Then fizzles at the end. Overall, worth the effort. But not by much.