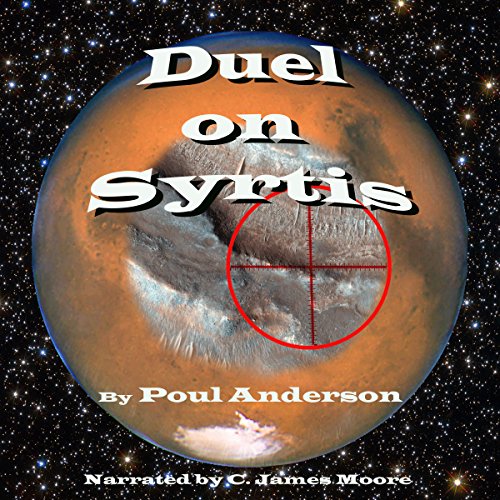 Riordan, a ruthless and wealthy hunter, needs one more kill to fill out his bucket list. He's faced down and brought home the wildest beasts on Earth, Venus, and even Neptune. But what he really craves is the hide of a Martian, and he'll pay any price, endure any obstacle, to hang that trophy on his wall.

Kreega, a wily century-old Martian well-versed in the killing pleasures of humans, and a survivor of the war that once raged between Earth and Mars, senses Riordan's presence in Kreega's isolated corner of Mars - the mountains, valleys, and desert plains of Syrtis. The wind, brush, rocks, and tiny creatures of Mars talk to Kreega and try to protect him as Riordan approaches with his rifle, hunting dog and falcon-like raptor eager for a taste of Martian flesh. But the hunter is relentless, pressing on despite all of Kreega's efforts to evade, trick, and stop Riordan.

In Duel on Syrtis, science-fiction writer Poul Anderson's 1951 chase thriller, we watch from a God's eye view as the hunter tracks the hunted...and as the hunted reaches deep into the very heart and spirit of the Red Planet to turn the certainty of death into the possibility of freedom and wicked retribution.

What listeners say about Duel on Syrtis