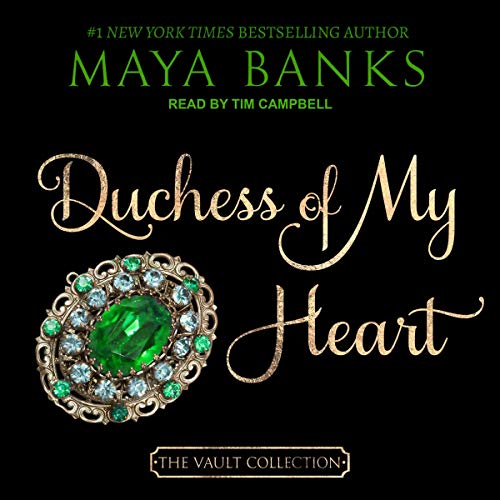 Duchess of My Heart

Duchess of My Heart

Jillian's marriage was a nightmare, the news of her husband's death an answered prayer. She refuses to bow to the ton and pretend to mourn. And her best friend, Case, will be by her side as she defies society's rules and has her first taste of freedom.

Justin, eighth Duke of Whittington, is determined to save his family name from the scandal his brother Case is creating, but the lovely Jillian is not the foe he expected. Both vulnerable and vexing, he's never met another woman like her. But as sparks fly between them, Justin realizes he must help save Jillian from her past before they can ever have a future.

The chemistry between ALL the characters is so unique and perfectly expressed; this made the book even more enjoyable than the way it was written. Maya Banks is simply amazing!

The narration was bang on. All the characters were uniquely heard with precision. Took the book to another level.

This is a beautiful love story. You will definitely enjoy it.

I wrote a review before but....

“Somehow it disappeared” I thought my initial review was ok. I only stated why I didn’t care for the book. First the pros. I thought the love story between Jilly and Justin was good. Once Justin figured out his feelings he was all in no questions even with the brutality and tormented past Jilly had endured.
Now the cons: Spoilers moving on.....


So the first thing that irritated me was the tone the narrator took for Justin’s character. The narrator was quite good except for the tone he gave Justin. He made him sound like a ruffian, a brute, not a savy or sauvé tone of Romance, meh for me it was a turn off for the audio version. Otherwise the narrator was good.
Next if you don’t mind reading/listening about the most vile despicable villain or about brutal domestic violence and rape then by all means jump right in but Jilly’s husband was the thing that nightmares are made of and if there are people with characteristics like his then it’s probably one of the reasons capital punishment exists. What a vile character.
Finally and this is just my preference, I don’t like too many grey areas. The last few chapters would have been easier to swallow if the H/h didn’t knowingly move one with her still being legally attached to that monster of a man. It did all work out I’m end though.
So if you are ok with the above mentioned then it would be a good read for you.

I liked this story very much

However buyer beware there is violence against women. Even knowing that a couple of places took me by surprise. I LOVED Justin. The fact that he loved her so much even after her appalling experiences. I recommend!

Awesome all around. Loved it..


I really enjoyed this book.

Loved Justin, Jillian, Case and Hawk. It was a great love story, not an insta-love like so many stories now-a-days. Jillian was married to a creep of a man who beat her constantly and refused to mourn him when she was told he died when his ship went down. Justin thought she was involved with his brother and was going to put a halt to that as soon as he could. And that became a hatred/love story that was just wonderful, at the same time someone was trying to kill Jillian.

There was explicit sex but no swearing.

As to the narration: Love, love, love Tim Campbell. He reads with so much emotion and voices everyone wonderfully.

This was a well developed story but!

As a person sensitive to violence perpetrated on women and children I cringed many times through this book. Many scenes made me wince
Though in fairness to the author this is a reality of life.

The narrator was very good.

One last thing, I know that many authors write graphic sex scenes to tantalize the readers. I have read many excellent books that don't provide graphic detail but are so skillfully written that you know what is going on without the smut. I feel that this author is good enough to leave out the graphics and still tell a great winning story.

Will be purchasing the series. Kudos to the narrator, Tim Campbell. Smartly written, nuanced characters, excellent balance between conflict/attraction/resolution. Believable angst, beautiful vulnerability, romantic without being sappy and unrealistic. Characters are basically likable, even when showing their flaws...a feat that many authors cannot achieve. Quickly becoming a Banks fan!

i love it when books move the story along....when there is action and story progression, instead of just dialog and personal reflection. Great book.

The narrator didnt anoy me, the plot was well developed, the characters were not one deminsional...... it is worth the credit.

I so enjoyed listening to this beautiful love story! The narrator was perfect! Gillian and Justin are a fabulous couple caring for each other and fighting the odds to be the Duke and Duchess!

I bought this book strictly from the reviews and I am so glad that I did. The book is so well written and the story sucks you in right from the start. I listened to the entire thing in one day. I had no desire to do anything but listen to this story. If you are on the fence about this one don't be. It is one of the best stories I have read all year.