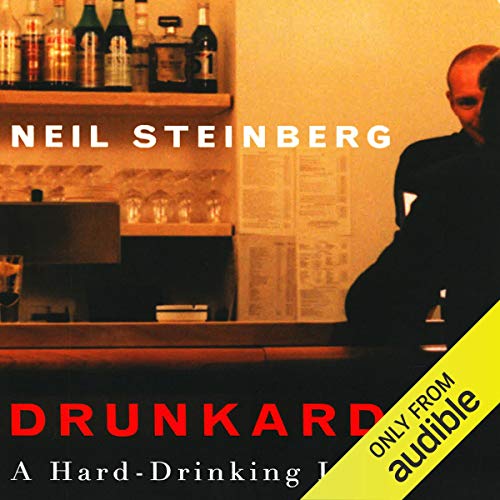 Chicago Sun-Times columnist Neil Steinberg loved his job, his wife, and his two young sons. But he also loved to drink. Drunkard is an unflinchingly honest account of one man's descent into alcoholism and his ambivalent struggle to embrace sobriety. Sentenced to an outpatient rehab program, Steinberg discovers that twenty-eight days of therapy cannot reverse the toll taken by decades of hard drinking. As Steinberg claws his way through recovery, grieves the loss of the drink, and tries to shore up his faltering marriage, he is confronted by the greatest test he has ever faced, and finds himself in the process. Steinberg's gripping memoir is a frank and often painfully funny account of the stark-yet-common realities of a disease that affects millions.

I found it easy to listen to and easy to relate to...defiantly a book to have in your collection if your struggling with alcohol or know someone who is.

Amazing story told by an exceptional narrator. The author leads the reader on a wild ride that resonates with this alcoholic

Disappointing. There wasn't a lot of context to this story. Basically a diary of drinking days, without much back story to make it all meaningful, and more importantly for me to invoke any sympathy. My guess is the 4 and 5 star ratings come from fellow alcoholics supporting the effort, but this really isn't a book. I was not invested in Neil, and quite frankly found him arrogant and entitled. Of course, this is the disease, which is why some "pre-disease" understanding of who Neil was would have been meaningful.. I would not recommend this book to a recovering alcoholic. Neal's enticing descriptions of his drinks of choice made me want to order up a Jack, and I've never even had one. I'd imagine this book would be very triggering for someone in recovery.

Well written and poignant story of alcoholism. The dreadful disease it is. At times I found myself feeling like Neil was writing from my thoughts.

Repetitive and drawn out

I personally know relapse and the cycle of addiction but his story makes its point of loving drinking more than life and family in an overkill way. He’s a fantastic words smith but it could have been a few hours shorter and therefore been better. It became boring and I wondered will he get sober and stay sober or just keep writing about the cycle of relapse and addiction. He did finally but it was too late for me to appreciate it. I was relieved for a resolution and the book to end.

Honest and funny - a true soul bearing memoir. With so much celebrity memoir fluff out these days I found Neil's account refreshing and clear.

story is relatable. narrator needs to stay away from British accent. makes a good women though.

I liked the way the story flowed. It got your attention right from the start and for the most part kept it during the entire book.

What aspect of Jeff Woodman’s performance would you have changed?

I thought he did a good job overall so not much.

When Neil "fell of the wagon" I had a sick feeling of disappointment. It's like he planned on drinking when his wife went out of town, and did not make any real effort to avoid doing so.

Jack Daniels is not a Bourbon as stated in the book. It is a Tennessee Whiskey and as such is quite different from Bourbon.

No filter profile of alcoholism

No filter profile of alcoholism from denial to grudging acceptance. Important antidote to the hyper positive books.
I say pieces of myself and appreciate the author's ability to write what he really felt and did. Excellent
I read a book to remind me why I gave up drinking.

Not a good listen

Struggled to stay interested. Feel mean saying it but didn't like the author and was difficult to sympathise. He came across as very selfish and self absorbed. Title is a bit misleading.

It was written well, and told as well as it could be but as a story to listen to it was just a bit vanilla. In recovery terms that’s a good thing but as a book to keep you gripped not so much so I didn’t feel like I got much out of it.