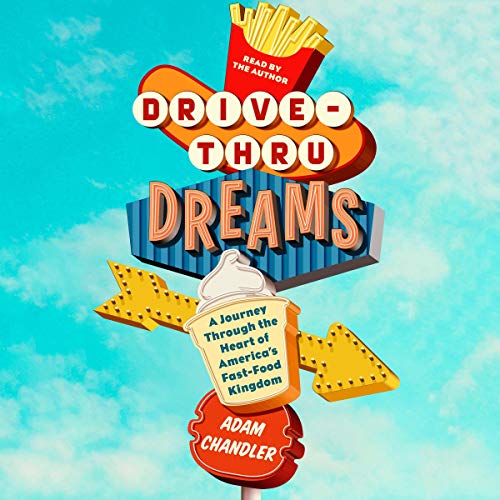 "Adam Chandler delivers his tribute to fast food with affection, zeal, and some humor... Mostly an enthusiast, he narrates his burger-infused stories energetically and persuasively." (AudioFile magazine)

This program is read by the author.

Most any honest person can own up to harboring at least one fast-food guilty pleasure. In Drive-Thru Dreams, Adam Chandler explores the inseparable link between fast food and American life for the past century.

The dark underbelly of the industry’s largest players has long been scrutinized and gutted, characterized as impersonal, greedy, corporate, and worse. But, in unexpected ways, fast food is also deeply personal and emblematic of a larger-than-life image of America.

With wit and nuance, Chandler reveals the complexities of this industry through heartfelt anecdotes and fascinating trivia as well as interviews with fans, executives, and workers. He traces the industry from its roots in Wichita, where White Castle became the first fast food chain in 1921 and successfully branded the hamburger as the official all-American meal, to a teenager's 2017 plea for a year’s supply of Wendy’s chicken nuggets, which united the internet to generate the most viral tweet of all time.

Drive-Thru Dreams by Adam Chandler tells an intimate and contemporary story of America - its humble beginning, its innovations and failures, its international charisma, and its regional identities - through its beloved roadside fare.

"On the page, terrific writers know how to have their cake (or their Big Mac) and eat it, too. Adam Chandler is such a writer, and Drive-Thru Dreams, his account of the wild and inalienable wonderland of American fast food, gives us not just insight and history but a pleasure that is downright gustatory." (Vijay Seshadri, Pulitzer Prize-winning author of 3 Sections)

Amazon.com Best Books of the Year

"This fun, argumentative, and frequently surprising pop history of American fast food will thrill and educate food lovers of all speeds." (Publishers Weekly)

What listeners say about Drive-Thru Dreams

Sandwiched between brilliant historical storytelling comes a brilliant pattie of cultural beliefs, a big layer of feel good fandom, some crispy acknowledgement of industry challenges and smothered in a "you just want more" sauce. Also at little over 6.5 hours, you wont spend all day waiting for this feast. This book is a must listen too

Adam Chandler's "Drive-Thru Dreams" is by turns funny, inspirational, clear-eyed, and sweet. I tore through it in two full days.