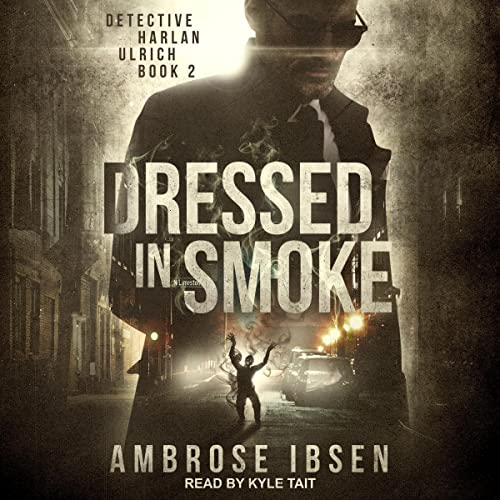 A face from the past

Once upon a time, Jonathan West lost his best friend, Ansel, under horrific circumstances.

Or, at least, he thought he had.

On a warm summer night, he finds himself reunited with the dead man - and hunted by a hideous entity that occupies Ansel's body.

In his hour of need, Jonathan could have gone to the authorities, or hired an esteemed security service.

Instead, he winds up soliciting help from none other than Tanglewood's most curmudgeonly private eye.

Harlan Ulrich is on the case, for better or worse. The over-caffeinated eccentric will have to employ every tactic in his unorthodox playbook if he's to save the client - and himself.

What listeners say about Dressed in Smoke

I liked this book only slightly less than the first in the series. The characters are great but the story lagged in parts. I kept waiting for the other shoe to drop and was a little disappointed at the resolution. Fun read, though and I will definitely read the next in the series.

If your into snakes, this is for you

I personally cringe when hearing about snakes or reptiles, so take my review with a grain of salt, The characters are well established by this 2nd novel, and hoping for another novel like the first. I absolutely laughed out loud at the ending because SURELY he is not that naive but I get that some readers would surely believe that if sent to them, so I completely understand the jest of it. Hoping another novel is more like his first.

Not as good as the original Harlan Ulrich series

The new Harlan is somewhat boring, or maybe the narrator does not give Harlan the personality that made the first three books so much fun. I was mildly disappointed in book one, but gave this one a chance. It is ok, Just an average creature story, with a surprisingly stupid ending. Not to be a spoiler, I hope, but after ending the storyline, we get another insight into Harlans new character, and I seriously doubt I want to continue with this series if there is another book. I do enjoy Ambrose Ibsen most of the time.

This is the 1st book by Ibsen that
1. I lost interest in parts and thus lost the storyline.
I had to relisten several times.
2. The ending just abruptly stopped the story.

An excellent tale of creatures & coffee

Disclaimer: I was provided a copy of this audiobook free of charge in exchange for an honest review.


So Harlan is back and, after his experiences with spooky paintings and ghosts in the past, he has continued to attract unusual cases but nothing could have prepared him for what fate had intended for him when a bedraggled young man walked into his office seeking protection.


First I wanted to say that the thing I've liked most about the Harlan Ulrich books is just how likeable, well rounded and believable Ambrose Ibsen's characters are. Everyone from the coffee-shop proprietor to an insane Herpetologist feel and speak in a wholly realistic way and I continually felt a sense of worry about how some of them may not survive the dangers that the new case invited. Once again Kyle Tait brings his A game with the cast and regardless of gender, age of station they all feel unique, identifiable and alive.


And on  that subject, I have to say that the risks were substantially higher this time with a more dangerous and nefarious being to challenge our intrepid investigator besides a disgruntled housewife. Chapter one did a fabulous job of introducing us to the new 'being' and did so in an extremely visceral way but this brings me to one point I'm having trouble reconciling.and that is the actual genre the book is aiming for.


Book1 felt like a ghost story through and through and yet I can't decide if this is a horror story, a detective tale or an adventure story as the horror elements do feel secondary to a lot of the plot except a few moments.I think the fault was my own, as the opening chapter set a tone I thought may be present throughout the book but it was in keeping with book 1 and is more about interesting characters than violence or gore. So for me, it's kind of an adventurous, investigative horror with black comedy moments and I'm sticking to that.


So again, Mr Ibsen has done a great job of giving us likeable characters, an interesting story and solid moments of horror and I for one and looking forward to Ulrich's next foray into the unknown.