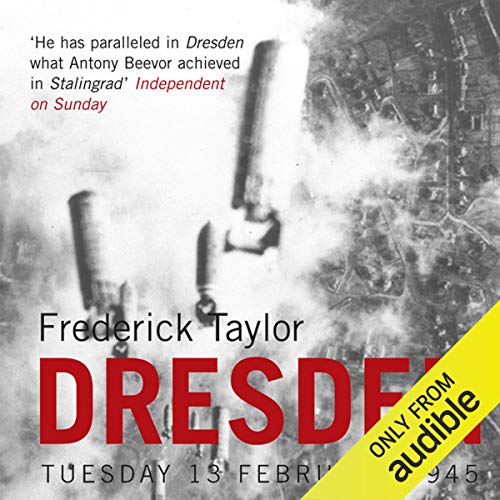 At 9.51pm on Tuesday, 13 February 1945, Dresden's air-raid sirens sounded as they had done many times in the previous five years - until then most always a false alarm. No searchlights probed the skies above the unprotected target city; the guns had mostly been moved East to counter the Russian advance.

By the next morning, 796 RAF Lancasters and 311 USAAF Flying Fortresses had dropped more than 4,500 tons of high explosives and incendiary devices. More than 25,000 inhabitants perished in the terrifying firestorm, and 13 square miles of the city's historic centre, including incalculable quantities of treasure and works of art, lay in ruins. It was Ash Wednesday, 1945.

This is the first serious re-appraisal of an event that lives in the popular memory with Guernica and Hiroshima as a by-word for the horror of 20th-century air warfare. In addition to drawing on archives and primary sources only accessible since the fall of the East German regime, together with British and American records, Frederick Taylor has talked to Allied aircrew and the city's survivors, whether Jews working as slave labourers, members of the German armed services, refugees, or ordinary citizens of Dresden.

'Taylor weaves a chilling narrative from eyewitness accounts and...documentary research...His account of the air operation... is quite superb.' (The Times)
'Taylor's magnificent... study... surely as close as the English language will get to a definitive, balanced examination of the subject.' (Scotsman)

I have just been to Dresden (the birth place of my mum only a few years after the war) and I wanted to find out more about this dark day and this answered all the questions and it definitely seems to be true.

Really good book, tells the history based in facts and lots of documentation, destroying all kind of neonazi theory about Dresden. The bombing of Dresden was one of the saddest chapters of human history but in nothing can minimise what Nazi Germany did.

This book was a balanced and thought-provoking, as well as an emotional, account of the Dresden raids and the impact of those raids on the people of Dresden. Taylor does a good job in providing a realistic assessment of the reasons why Dresden was fire-bombed and the ways in which the firebombing became a moral issue at the time and in the postwar period. He also tells an emotive account of the raids as they were experienced by ordinary Germans, including German Jewish people. As an audio book, this is generally gripping stuff. Sean Barrett is a good narrator, although I find some of the accents irritating (at times). I would recommend this to anyone interested in the story of the Dresden raids/ history of the Second World War.

Wow so much information not only about the raid and the days around it but a full history of the town from humble beginnings to seat of kings. All I thought I knew was challenge with evidence and the pace of the story kept you hooked. The appendix provide modern information and figures that shed light on the reasons we think we know so much but that we truly only know a little. Great read!

An exceptional piece of work.

Hard for me to overpraise this splendid book. It's content is a brilliant melding of the history of Dresden, the specific events of the late second world war which led to its destruction and an an extraordinarily detailed and lucid description of that horrific destruction itself. There is an excellent balance of the macro-historical and personal throughout, lending a limpid air of pathos to the narrative. The narration is clear, precise, well paced and euphonious; really of the very, very highest quality. Anyone with an interest in history will enjoy this work, which is as good an audio book as I have heard. Highly recommended.

|This first part of the story of the bombing of Dresden gives an in depth build up history of the creation of this beautiful city as it was then in 1945. The history of how Dresden came about is very interesting and detailed. The narrator gives full depth of meaning to the descriptions that are given. Though it may be difficult to visualize what is being spoken about in the description of Dresden's forming throughout the early wars of dominance with most of the then surrounding European countries. Then Hitler arrived on the scene with his Nazi's. The demise of Dresden was only then a matter of time. Especially it became the hub of manufacturing factories of high grade optical instruments of war along with other war industries. Which slowly turned this beautiful city into an eventual legitimate target for the Allied air forces. Namely the RAF at night and then the USAAF during the day. Riveting listening which allows ones imagination to place you at the scene and become part of the story.

A story of the human tragedy of war.

The story from both sides including the history of this historic city. Lots of viewpoints but gives the listener the absolute example of the tragedy of what war can do.