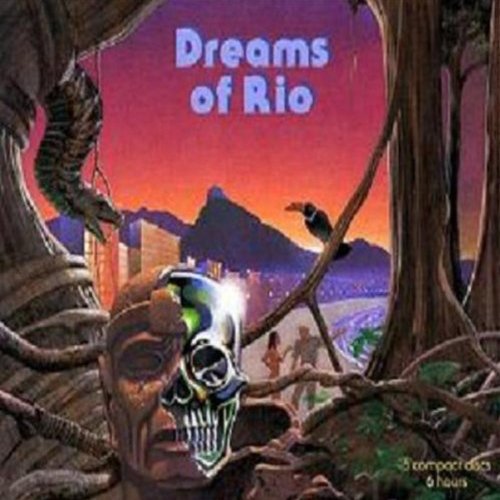 Hypnotic voodoo beats, lush jungle noises, tropical rains, an enigmatic European professor, an alluring female anthropologist....these are a few of the ingredients that M. Fulton has fashioned into his latest audio fantasy, Dreams of Rio, an engaging romp through the forests and samba clubs of Brazil. Dreams of Rio chronicles the tropical adventures of hero Jack Flanders as he treks through the mysterious wilds of Brazilian rainforests and impossible situations in his search for the Lost City. The crisp stereo recordings come vibrantly to life with luscious ambient sound recorded by Fulton and Clark on location in Brazil.

Dreams follows Jack as he escapes from the U.S., a country transformed into a giant shopping mall, and undertakes a journey to Rio to retrieve a statue for a friend. Once in his hands, the statue cracks open to reveal a crystal skull. This is just the beginning of an endless chain of chilling plot twists and turns. Along the way, Jack encounters vampire bats, voodoo musicians, a Carmen Miranda museum, and an alluring German anthropologist, Frieda, with whom he falls hopelessly in love. Together they journey to the Lost City.

What listeners say about Dreams of Rio

This writer is not for everyone. The book a mixture of fantasy, hallucinations, insanity and campy humor. The stories are great with characters that are out of this world, the background music and animal sounds in the audio book are beautiful. But I know a lo of people find that sort of thing annoying.
These are actually radio episodes that have strung together, so the synopsis can get tedious, but the cast is hilarious and they occasionally end up in uncontrolled laughter.and the synopsis is short.
This is pure fun, if you're looking for enrichment or enlightenment look elsewhere.

ZBS radio serial. Some gaps between the parts, but not distracting. Great sound effects, ambiance, and voice acting.