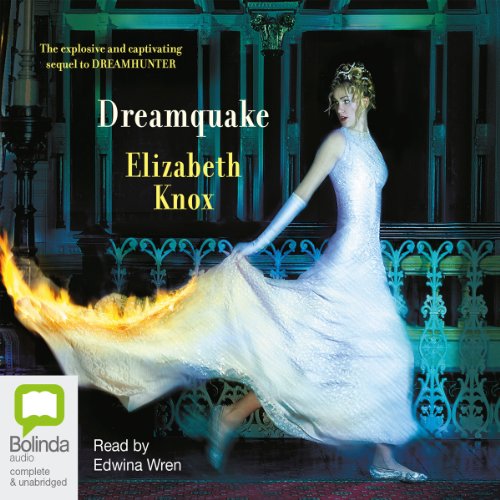 Entering other people's dreams used to be fun for Tzinga, but now he's gone missing, and his daughter suspects he's trapped in a nightmare. If she's to save her father, she'll have to follow him into this frightening world. Edwina Wren performs this haunting story with simplicity and warmth. Listening to her melodic voice warms even the worst nightmares. She modulates her volume, pacing, and pitch to keep listeners engaged. Students in grades seven and up will enjoy book two of the Dreamhunter Duet.

The highly anticipated sequel to Dreamhunter (also available in audio by Bolinda). Inventive and richly imagined, Elizabeth Knox's dramatic conclusion will satisfy readers – whether or not they've read Book One.

The horror of the Rainbow Opera riot is the talk of the country. Dreamhunter Grace Tiebold's reputation is in tatters and Laura is in hiding. But the nightmare has only just begun. Rumours about the government's torture of prisoners have been suppressed and corrupt minister Cas Doran is free to take his plans to shocking heights. For at a secret depot deep within the Place, a new, terrifying dream has been unearthed – waiting to wreak havoc on the country and give Cas Doran ultimate power. Laura and Rose know they must stop him, but in doing so they start a chain of events that could bring dreamhunting to its knees and blow open the deepest mysteries of the Place.

"A lyrical, intricate and ferociously intelligent fantasy." ( Kirkus Reviews)
"Knox's fascinating story imagines the intersection of a haunting dreamworld with a gritty real world...This fully imagined world will surely lure readers back for multiple readings." ( Publishers Weekly)
"A tantalising feat of imaginative fiction...perhaps the most dazzingly inventive of her books to date." ( Magpies magazine)

What listeners say about Dreamquake