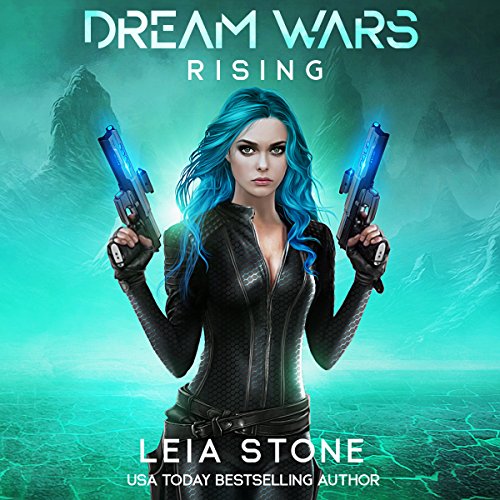 Inception meets War of the Worlds with a sassy female lead.

My name is Kit Steele, and I was 10 years old when thousands of alien ships landed all over the world in the year 2020. We thought for sure that we'd be goners, about to be obliterated or terraformed out of existence. But when the ship doors opened, they were...empty. Maybe they were just communication vessels, we thought.

But that night, when humanity fell asleep, we were sucked into an alternate dimension. The Dream Wars. A place where the alien ghouls fed off of your body unless you fought back. If you're killed in the Dream War, your body dies on Earth. That was 10 years ago, and I've been training for the Dream War every night since then. Each time I close my eyes and drift off to sleep, I become a merciless killer taking out as many ghouls as I can. It's earned me the rightful title of Commander, and now I protect the rich in their sleep with my team of warriors. But the one thing I didn't expect was that my new client Damien Striker might be able to put a stop to this war if I can keep him alive long enough.

Medic Ronnie Sotto - Kit's best friend, graduated Harvard medical school at age 15, loves cats, favorite color pink, and once did leg surgery on a cat in the dream war to save its life

Lieutenant Brisk Hutchins - Slept with Kit one time, is in love with Ronnie even though she turns him down because he slept with Kit, pretends to like cats, has one of the highest ghoul kill records second to Kit, secretly loves old Britney Spears songs

Pyrotechnic expert Nox Lightfoot - Nickname "pretty boy", likes to light things on fire, thinks cats are okay, and would jump in front of a bus if it would bring bacon back

This book is great! Well developed characters and a world that is interesting and worth getting sucked into. I’ve had many a day of hanif out in my car with this book.

So orginal, makes it worth the listen everytime. love Leia Stone and Vanessa Moyen. I would try their books anythime.

The story and the narrator had me hooked from the beginning. I can't wait to download the next book to listen/read.

This was a pretty unique story! Very interesting, I'll definitely be reading the rest of the series. The narrator did a wonderful job as well! The character voices seemed fitting and were all easily distinguishable from each other.

Disclaimer: I received a copy of this audiobook in exchange for an honest review.

This book was so good! It grabbed me from the moment I started it and did not let go. I didn’t want to put it down or stop listening. This was such a unique and interesting concept where sleep is not for those who are strong enough or wealthy enough enough to afford protection from the aliens. I loved all of the characters and their dynamics. This was an amazing first book and I can’t wait for the next one!

I have read many Leia stone books and this was definitely different but it did not disappoint. They way she writes draws you in and holds onto you until the end. I am excited for the second book. Vanessa Moyen also did a fabulous job of narrating the book and she brings it to life!

this one was different not was I was expecting at all, but worth reading and/or listening to

Now I am hooked.

I have had several people recommend this series to me, but I never took the time to read the books. Then I saw audio book and binge listened to it in one day. The story is interesting, the characters amazing, and the narrator does a brilliant job of bringing them to life. I can’t wait to to try the second book.

Loved this book so much!

This book kept me on the edge of my seat the entire time and I truly could not put it down. I really enjoyed the concept of the aliens who take over your dreams, making sleep a dangerous and limited commodity for those fit or wealthy enough to protect themselves. The writing was so enjoyable and the narrator truly brought the story to life. I am itching for book two!! I 100% recommend it!!

Great start to a new series!

This book has it all. It's a mash-up of sci-fi and dystopian with a hint of romance, and tons of fast-paced action with a strong female main character. The ending definitely leaves me wanting more! And the narration really brings this story to life. Five stars all around!

Leia Stone is an amazing author with a really creative mind. Dream Wars is a fantastic series, not normally into si-fi but as it was Leia Stone though I would give it a go and as usual this author does not disappoint!! Kit and her crew are amazing characters and I can’t wait to see what happens next!! Plus with Vanessa Moynes narrating you can’t go wrong!! 5 stars ⭐️⭐️⭐️⭐️⭐️