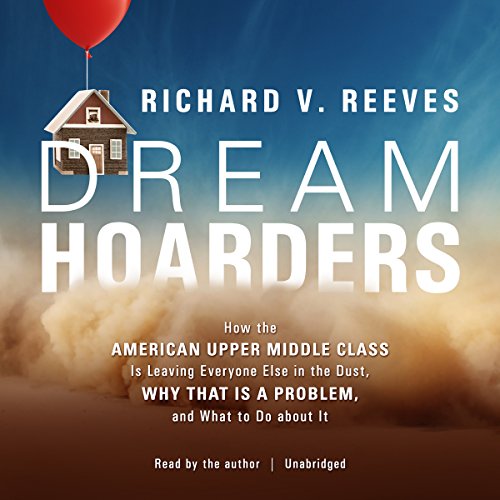 How the American Upper Middle Class Is Leaving Everyone Else in the Dust, Why That Is a Problem, and What to Do About It
By: Richard V. Reeves
Narrated by: Richard V. Reeves
Length: 4 hrs and 40 mins
Categories: Non-fiction, Economics
4.8 out of 5 stars 4.8 (5 ratings)

America is becoming a class-based society.

It is now conventional to focus on the wealth of the top 1 percent - especially the top 0.01 percent - and how the ultra-rich are concentrating income and prosperity while incomes for most other Americans are stagnant. But the most important, consequential, and widening gap in American society is between the upper middle class and everyone else.

Reeves defines the upper middle class as those whose incomes are in the top 20 percent of American society. Income is not the only way to measure a society, but in a market economy it is crucial because access to money generally determines who gets the best quality education, housing, health care, and other necessary goods and services.

As Reeves shows, the growing separation between the upper middle class and everyone else can be seen in family structure, neighborhoods, attitudes, and lifestyle. Those at the top of the income ladder are becoming more effective at passing on their status to their children, reducing overall social mobility. The result is not just an economic divide but a fracturing of American society along class lines. Upper-middle-class children become upper-middle-class adults.

These trends matter because the separation and perpetuation of the upper middle class corrode prospects for more progressive approaches to policy. Various forms of "opportunity hoarding" among the upper-middle class make it harder for others to rise to the top rung. Examples include zoning laws and schooling, occupational licensing, college application procedures, and the allocation of internships. Upper-middle-class opportunity hoarding, Reeves argues, results in a less competitive economy as well as a less open society.

Inequality is inevitable and can even be good, within limits. But Reeves argues that society can take effective action to reduce opportunity hoarding and thus promote broader opportunity. This fascinating book shows how American society has become the very class-defined society that earlier Americans rebelled against - and what can be done to restore a more equitable society.

What listeners say about Dream Hoarders

If You Have a Grad Degree You Need To Read This!

This book is amazing. I never even considered the 1001 different ways that the upper middle class is able to game the American system to ensure that as much opportunity and wealth as possible is passed along to their kids. What a wakeup call for me...

Read this book if you want to know how Nixon was a liberal, Bernie Sanders was (in some big ways) a conservative, and everything you think you know about inequality is wrong.

I love how much fascinating information the author is able to fit into such a short book. If you happen to be in the upper middle class like me, you might want to pour yourself a glass of scotch before you read this one. This book holds up a mirror to what you thought was your own perfectly ethical behavior...and oh brother are you not going to like what you see.

Let me start with where I am in full agreement with Mr. Reeves. I have been speaking nationally and regionally about the reality of class privileges in the US and the reality of class in the US, and the need for the upper middle class to put away our "we are the 99%" signs and recognize our place of privilege. I think that conversation is a necessary precursor to any discussion about addressing the issues in this book. Reeves, to his credit, does spend a fair amount of time (given how short this book is) doing this topic justice, although if you are just entering this conversation, this book is more of a launching point. It is probably not critical enough of the data (see the 2/24/19 NYT piece by David Leonhardt, and also I don't think it mounts a serious response to Piketty's argument about the ultra rich and other agglomerations of money in the billions of USD). I think the title is a misservice. This book is not a screed. It is by us, about us, and for us - it's precisely the upper middle class that is the audience for this book, and I wouldn't recommend it to anyone who is not in our group. The solutions proposed are interesting, and are not unrealstic, albeit they could use more fleshing out. In the end, as someone who has been doing my smaller part in addressing these kinds of issues, I really respect what Reeves has to say and I think it bears more serious thought.

Very thorough analysis! However, he never made much if a case for the conservative upper-class citizen to voluntarily change course. Relative mobility is a very tough sell. I may be over not going to Harvard 40 years ago. The combination of a middle class economic level and Jimmy Carter made the full merit-based scholarship to an excellent state school an easy decision. The same thing happened 3 years later for medical school. I am sure that similar situations are still happening to even upper middle class students today. To ask groups to voluntarily to give up dreams is a very tall order!

I appreciate the way that he was able to diagnose the information and tell the truth about how the American society has a class system and sets people back.

I am a member of the upper middle class that Reeves speaks of, but at the bottom end. I don’t feel privileged. I am able to afford a modest house for my family of five and we don’t have a lot of worries about money, but we also don’t live high on the hog. I am willing to sacrifice, but the sacrifice needs to extend to the very top.

Half right, Half exasperating, Ultimately Naive

I suspect much of the appeal of this book for what he calls ‘upper middle class’ listeners is Reeves’ almost RP accent - which conjures up evening spent watching Downton Abbey and the Crown. Well done, Richard. Having the advantage of seeing American society as an upper middle class quasi-outsider - no educate Brit can ever be a true outsider in this land of adoration of most things perceived as British - Reeves is perceptive in describing what our upper middle class is in the process of becoming. He strikes me as profoundly naive, however, in conflating the earned privileges of the upper middle class with the still legally enforced privileges of the British aristocracy, even in its broader form that includes their non titled children and relations. We have no equivalent of the squirearchy or the monarchy, however much some would to have it in substance (though, of course, not form). He might well be on firmer ground if he saw (he may well, the book does not make the point) our growing bureaucracy based in Washington as something akin to the permanent Establishment of the British civil service. (Much of which, it should be noted, has worked assiduously over the past 50 years to thwart the policies of Tory prime ministers from Harold Macmillan to Margaret Thatcher and down to the present day. But I digress. Where Reeves is exasperating are in his naive assumptions that his position is the morally superior, that all forms of inequality are ultimately inherently wrong, and in his almost touching commitment to a Jacobin, almost Marxian, notion of the perfectibility of human nature. For virtually all of his prescriptions for change are based on the notion that human beings will ignore what they perceive (accurately, he admits ) as their broader self-interest (i.e., including children and descendants) in order to support policies designed to ensure more (though not total) equality of result. Moreover, perhaps because of ignorance of American history, Reeves seems to fail to understand that almost all of the things he cites, such as zoning, tax breaks for housing, standardized testing, etc. were originally progressive reforms intended in many cases to increase opportunity. He seems to have missed the lectures on the law of unintended consequences. Again, it goes to his naivete, but perhaps Reeves' fundamental error is in seeing all of these barriers as intentionally created for the purpose of keeping the masses down. That said, I think the book is useful for the honesty and clarity of the diagnosis. I’d love to give it a split rating: 5 stars for observation and exposition of his diagnosis, and 0-1 stars for moral preening and prescription.

Well paced, finished quickly at 1.5 speed. Makes you look at just how important the first twenty years of development are to all of us.

Dream hoarders explains how the upper middle class is hoarding wealth from everybody else below. It provides solutions to help curtail the accumulation of wealth by listing a set of policies and ideas to prevent the wealth stripping experienced by America's lower classes. I would recommend this book because the author does a masterful job of depicting how the upper middle class hoards wealth. he is very honest and his assessment and fully understands that his own position means that others will fall.

Required reading for the privileged class

A vital read for fellow members of the meritocracy, especially as societies on both sides of the Atlantic deal with the fallout from democratic shocks meted out by the losers of the new dominant socio-economic sorting system. Reeves delivers hard truths about how fair the modern US meritocratic system really is, and whether the idea of US exceptionalism — the land of the American Dream™️ — is justified. Zoning laws, unpaid internships and the college admissions system are all in the dock, as Reeves makes the case that what often appear to be respectable — even admirable — goals and policies can produce and ossify class structures, inequality and social immobility. Unequal access to childcare and early years education are also discussed in depth, and for every mechanism that Reeves believes is part of the problem, he proposes possible solutions, from personal decisions to government policies. All in all, an excellent, thoroughly researched and refreshingly evidence-based examination of the causes of worsening social mobility in America, providing plenty of challenging proposals for readers to consider at the end.